I have always had a soft spot for Logroño. Most of it isn’t pretty, but it seems to have everything I require from a Spanish city – wide streets lined with cafés and shops, fountains and comfortable hotels, while at its centre is the wonderful old town or Casco Viejo. This delightful pedestrianised zone is a higgledy-piggledy area of narrow alleys lined with bars and over the last 20 years or so it has become a mecca for tapas lovers. In many ways, as the landscape is so unforgiving and the pueblos – wine towns – small and quiet this is the heart of Rioja.

Funny stuff tapas. It is one of Spains great gifts to the world and as much a cultural icon of the country as Paella, bull-fighting and Miró, but in truth I think the story of tapas is more like that of Pizza in Italy. Yes, Pizza is Italian, but it was popularised and made special elsewhere and then returned triumphant to the land if its birth. I remember 1960s Spain. There was precious little tapas then, unless you went to the really big cities or Andalucia. That is where tapas is supposed to have originated as a cover or lid (tapa) to keep flies out of your sherry glass. Originally it was simply a piece of jamón, chorizo or bread, but as the competition hotted up they became more complex and interesting – although I for one always find jamón interesting. Tapas existed in the cities and Andalucia and possibly the Basque country, but in the past it was a simple nibble with a drink. It took the tourist boom to make it famous and to turn it into something creative and gastronomic with groups of people sharing lots of little dishes instead of dinner.

There are many competing stories and myths about the beginnings of tapas, but reading some descriptions of Roman meals always puts me in mind of tapas. This is because they often seem to have been made up of lots of dainty morsels rather than having a central dish as we tend to – and remember the Romans occupied Spain for 600 years. In Spain deep fried things in batter – famously calamares and gambas, but also often artichoke hearts – are still described as being ‘a la romana’, or in the Roman way. Of course the Romans had a great tradition of snacking and street food as did the Moors who held Spain for several hundred years too and their food also seems to incline toward a series of little bites, much like Turkish and Lebanese food today.

Of course tapas can be very moreish.

As Logroño has made such a speciality of tapas in recent times, a tapas crawl of the old town is a real highlight of any visit to Rioja – even though it isn’t a particularly good way to enjoy wine in my opinion. The place provides as vibrant an assault on your senses as the centres of Seville or Madrid. The narrow streets are hot and made more so by the open air cooking in the bars that you pass. All the cooking smells hit you too, just as much as the heat, and add to the exciting, exotic atmosphere – throw in a crowd and you are ready to fiesta.

You don’t need a map, just follow the throng and keep to the streets around Calle del Laurel and you will not go far wrong. Recently I was there with a small group of wine writers and to keep our potear – verb meaning to tapas crawl – focussed we had the inside track from our local guide in the shape of one of the world’s least likely Depeche Mode tribute acts; Javier Perez from Bodegas Faustino. Javier is no mean tapallero – a word I have just made up to describe one who tapas crawls, or trawls if you prefer – and he led our little group well.

Javier our tapallero – I really want that word to catch on.
Photo by kind permission – ©Brett Jones  www.thewinemaestro.co.uk

First stop was the strangely named Bar Charly – Travesía de Laurel 2 –  which specialises in meat, especially Morritos – Pinchos Morunos in the rest of Spain. Pinchos here means skewer or brochette and is not to be confused with Pintxos which is the Basque word for tapas and often used in Rioja and Navarra, many of whose people claim Basque origins. Bar Charly also plancha chopped kidneys and drizzle them with a lovely herby sauce, which is superb for €1.50 and goes really well with the un-labeled chilled house red. 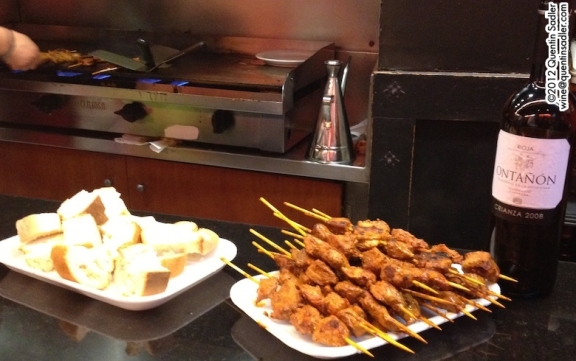 Rather wonderfully most of the bars in the Calle del Laurel area seem to either be famous for serving one thing or to actually just cook one thing – I have really only come across that in Madrid before and as someone who can dither over a menu for hours, I like it. It certainly makes life simpler and gives you an impetus to move on and try something else. 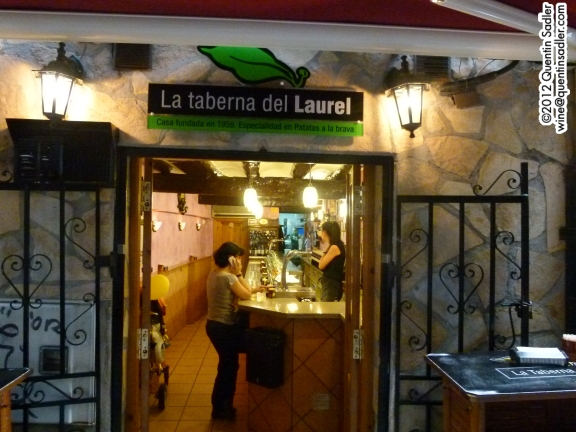 So if Tortilla and Patatas Bravas are your thing, then head for Taberna del Laurel, Mesón Charro for grilled chops, Bar La Rueda for squid kebabs, Bar La Viña for Chipirones – baby squid to you and me. 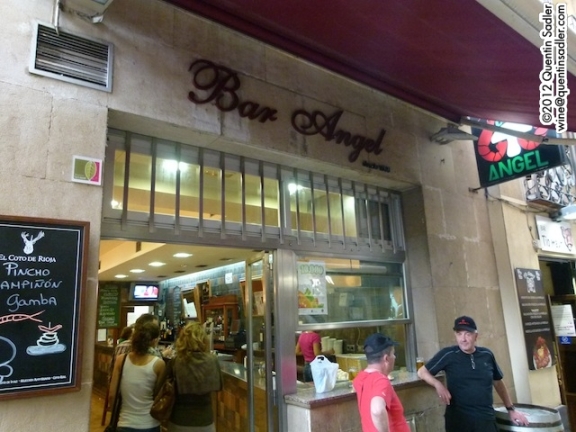 Next was the Bar Ángel – Calle del Laurel 12 – whose sole culinary item is a Pincho Champiñon con Gamba, three griddled mushrooms skewered on a toothpick and topped with a single prawn. It tastes a lot better than it sounds, but I amused myself thinking how the discussion would go at the bank if you wanted to borrow the money to open a similar place in the UK. ‘Okay Mr Angel sounds great, but what will you offer the customers who don’t eat prawns…or mushrooms?’

I was astonished to find later that Bar Soriano – which is so close to Bar Charly that it shares the same address – offers the exact same mushroom and prawn menu!

Pata Negra – Calle del Laurel 24 – is named for the black hoofed pigs of south west Spain whose meat is used to make the great jamóns. Which tells you exactly what this place specialises in – ham and bocadillos made from it, which are the perfect partner to lightly chilled red Rioja Crianza I can assure you.

Which scratching of the surface of Logroño’s tapas possibilities almost brought the curtain down on our tapas crawl. I say almost because it was a very hot night, we all seemed to need some refreshment and Javier knew just the place. La Casita is right opposite Bar Charly and their speciality is a refreshing blend of lemon sorbet and Cava which makes a sort of grown up Granizado or slush-puppy that was just about as perfect a night cap as I could have hoped for.

Logroño probably won’t give you the most creative tapas around – San Sebastián might be the best place for that. Varying between €1-€2 a tapa it isn’t the cheapest either, in Granada it still tends to be free – in tiny quantities. Generally Andalucia would normally give you the most traditional tapas, but the bars of Logroño’s Casco Viejo give a great deal of enjoyment and a feeling of being somewhere very different.

9 thoughts on “A tapas crawl in Logroño, Rioja”