Or: When is a wine sweet or dry?

Sweetness is an absolute, right? After all a wine is either dry or it is not and the EU regulates that kind of thing – my friend Warren Edwardes outlines the rules here.

However it is true that most new world wines contain more sugar than their European counterparts. This does not make them sweet, just less dry – many a non-European Shiraz will contain anything from around 3-5 grams of residual sugar per litre, while the French equivalent will have less than 1 gram, which makes quite a difference in mouthfeel, richness and fruit character.

Again, this does not make these wines sweet, but it does make them softer and fuller in the mouth. It makes the tannins much less of an issue and ensures that the wine does not interact with your food quite as much as less rich wines, so a good food pairing becomes less important, it can even make the wine soft enough to enjoy without food – so you see a little sugar can be a useful thing.

However, it does seem to cloud the issue for many consumers who are new to wine – they do seem to think that all wine should be like Australian Shiraz.

We are used to non-European producers being very open about their wines, but I have discovered that it is actually often quite hard to get hold of residual sugar levels for new world red wines. Most technical sheets just say that they are ‘dry’, some have ‘Residual Sugar: Nil’, while more than a few just ignore the issue completely.

I had been pondering all this for some time, as the sugar level is important and I have seen for myself the effect that having ‘dry’ wines that contain a fair amount of sugar has. It changes the parameters of wine and makes traditional European styles seem austere and mean to young drinkers and casual drinkers who want a wine without food.

However, I was really surprised by something in America recently, which possibly helps to explain some of this.

In a winery I had just tasted a Viognier, which did not seem to me  to be completely dry. So, I asked the winemaker what the residual sugar was and his reply really startled me, he said ‘effectively zero’.

Now this wine did not taste as though it had virtually no sugar, so I pressed the point and asked what ‘effectively zero’ meant. His reply, after looking it up was that it was ‘0.7’.

I pressed further, as this wine could not possibly have such a minimal residual sugar content. Strangely though it did – if you measure sugar in the American way, it had 0.7% residual sugar – which to the winemaker was as good as zero and therefore close to his idea of a totally dry wine.

Actually though it is nothing like zero, when I tell you that on the European measure 0.7% residual sugar is a whopping 7 grams per litre – which in a low acid wine like Viognier is not dry, let alone anything like zero.

So, perhaps they just speak an entirely different sugar language over there and their Zero, or Nil is our 10? It would explain a lot about the differences in sweetness and why a wine with quite a whack of sugar can be described as having nil residual sugar on a technical sheet..

I love interesting and exotic wine, but how’s this for a really unusual product – a red wine that is so dry, you need to add water so that you can drink it!

It is intended for mountaineers, trekkers and rugged types in the great outdoors generally. I didn’t know people needed or wanted wine on such endeavours, but at least it is available. You can also get a mulled version for cold winter expeditions too, but I assume you add hot water to that.

This dried wine is available from Trek’n Eat who specialise in ‘food for your outdoor life’. They do have a wonderful array of stuff, which all seems pretty sensible and suitable for a trek – only the dried wine has the feel of an April Fool – I did check the date though.

The wine – or as it says on the packet, ‘Alcoholic Drink Powder with Red Wine Extract’, what a category at the Decanter Wine Awards that would be – is just 8.2% alcohol and there is no further information as to what red wine it is extracted from.

Can someone correct me if I am wrong, but if you are carrying water, then you may as well have normal wine in a plastic bottle or bag as have a dried version – or am I missing something?

I have looked in vain for similar products, which doesn’t surprise me, but perhaps this is a sector of the market that is thriving and loads of you are enjoying powdered wine?

If anyone has tried it I would love to read your tasting note.

Can I also thank my brother for bringing this product to my attention.

Charles Philipponnat was in town the other day and I could not resist the opportunity to try some of his Champagnes.

The Philipponnat family have been growing grapes and making wines in Champagne since 1522. They were originally based in in Aÿ, but Auguste and Pierre Philipponnat moved to nearby Mareuil-sur-Aÿ in 1910, where the Philipponnat Champagne house is still based in the beautiful Château de Mareuil.

Philipponnat has long been a favourite producer of mine, indeed I used to sell their Champagnes when I was a wine merchant, but most of the time I seldom get the chance to try them.

I was delighted therefore that Charles presented a range of six of his cuvées – the bulk of his range. This gave me true insight into the Philipponnat style and demonstrated what elegant and un-showy wines they are. END_OF_DOCUMENT_TOKEN_TO_BE_REPLACED

Whilst browsing in Majestic for some wines for a tasting, I spotted this wine from the Loire Valley A.C. of Cheverny and could not resist trying it as unusually for the region most of the white wines from here are blends:

The aromas are fresh, grassy, appley and appealing with hints of flintiness and smoke together with green apples and the merest suggestion of creamy yoghurt.

This is a blend of Sauvignon Blanc (85%), giving freshness, and Chardonnay (15%) which seems to add a roundness and soft texture to the wine rather than an obvious flavour. This makes for an attractively crisp wine that has good acidity that is softened and balanced by the mouth-feel.

The flavours are of sugarsnap peas, grass, citrus, herbs and blackcurrant with little touches of honey and cream. The finish is clean, crisp and very long, I wish I had some goats cheese to try it with.

All in all this is a very well balanced wine that is most enjoyable and leaves you knowing that you have enjoyed something classy and elegant – 88 points.

I have tried precious few Sauvignon Blanc and Chardonnay blends over the years, but on thinking about it I always seem to find that it works,  be it an everyday version – I have happy memories of the one made by Errazuriz in Chile and one from South Africa whose name I can no longer remember – or something more classic like this excellent example.

I really enjoy stumbling across wines that are new to me from places and grape varieties that seem unlikely. So recently I was excited to try some intriguing wines from Virginia.

I know that every state of The United States, except Alaska, grows grapes and makes wines from them, but apart from a sea of branded California wines and the occasional offering from Oregon or Washington State I never actually see any for sale. Even in New York I was hard pressed to find New York State wines. 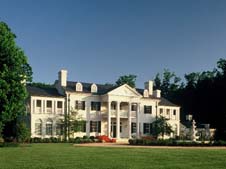 The beautiful Keswick Vineyards in Monticello

So, it should not seem surprising that Virginia, home of Washington and Jefferson, makes wines, but it does. Virginia was not the first state to grow grapes and make wine, that honour, strangely, falls to Florida (I have never been able to find a wine made from grapes from Florida, so if anyone wants to send me one to review – feel free). END_OF_DOCUMENT_TOKEN_TO_BE_REPLACED