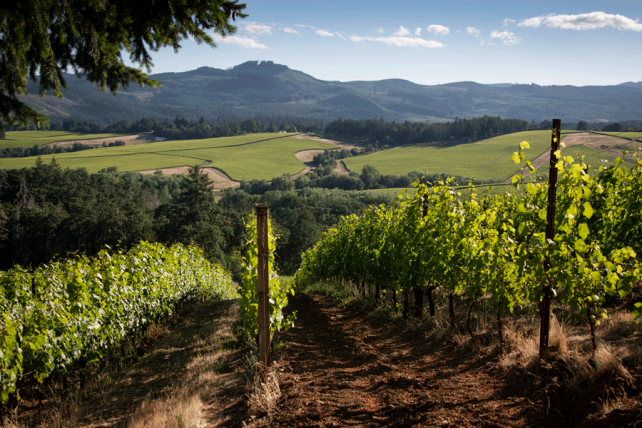 Well it has finally happened. I have become so old that I beginning to become obsessed by Pinot Noir. I have noticed that this happens to many of us who love wine, but never expected me to go the same way.

I have always liked Pinot Noir, but it took a long time for me to become utterly beguiled by this amazing grape. At its best Pinot Noir is enchanting and confusing, soothing and puzzling all at the same time. That, for me, is what makes it so potentially exciting – that inbuilt tension. Those characters that seem to contradict each other.

I have tasted a huge array of Pinot Noirs this year and many of them have been utterly delicious but one has stood out for me because of its sheer class and broad appeal.

That wine comes from Oregon in the United States and I like it so much it is my Wine of the Week and a recommendation to have with Christmas Dinner.

A map of Oregon showing all the wine regions and AVAs and an inset map showing where Oregon is. The Willamette Valley is in the north east of the state around Portland and Salem. Yamhill-Carlton AVA and Dundee Hills AVA are sub regions of the Willamette Valley AVA.

Forty odd years ago it was widely believed that Pinot Noir could only produce good wine, let alone great wine, in Burgundy. Almost everywhere else was considered to be too hot and this was borne out by the early, clumsy, overripe and jammy examples from California. Well everyone likes a challenge and I have yet to meet a winemaker yet who doesn’t secretly want to produce a great Pinot Noir, so the search was on for somewhere outside Burgundy and Europe that could produce world class examples of this captivating variety.

In the early to mid 1960s a group of winemakers who had experience of making Pinot in California, trekked north to Oregon and they liked what they saw. Over the next couple of decades more and more growers joined them and slowly they put Oregon wines on the map – especially Pinot Noir. The culmination of this was the 1979 Gault-Millau French Wine Olympiades – a sort of Judgement of Paris for Pinot – which saw Eyrie Vineyards‘ 1975 South Block Pinot Noir placed in the top 10 Pinots.

As you might imagine this caused consternation in Burgundy and Robert Drouhin arranged for a rematch. The winner was Joseph Drouhin’s 1959 Chambolle-Musigny Grand Cru but the Eyrie came in a very close second. As a consequence Maison Joseph Drouhin built their own Oregon winery, Domaine Drouhin, in 1988. Oregon had arrived. 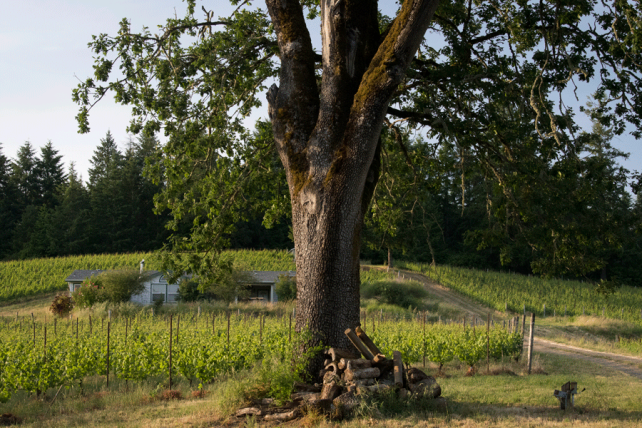 So why does Oregon have this effect? Why does it suit Pinot Noir? The answer of course is the climate. The Willamette Valley – pronounce Will-am-it, to rhyme with damn it! – which is the heart of Oregon’s Pinot country, enjoys a mild maritime climate. Yes it can be very wet, but the rain is almost only in the Winter, not the growing season. Temperatures in the growing season are actually slightly lower than in Burgundy, on average 14.7˚C as opposed to Burgundy’s 15.2˚C. Even that 14.7˚C is tempered by Ocean breezes and significantly cooler nights. The diurnal temperature swing is often between 16˚C and 22˚C difference. This slows down the ripening period and preserves the natural acidity, so builds ripeness and complexity while retaining freshness. All this is helped by long sunny days during the growing season.

Oregon has developed in a certain way, as a land of artisan growers and winemakers who hand craft their wines in boutique wineries in an idiosyncratic way, making the state a sort of new world echo of Burgundy itself. Eventually the pull of Oregon was too strong for the venerable Burgundy house of Louis Jadot to ignore any longer.

In 2013 Louis Jadot, a Burgundy house since 1859 – although the Jadot family have been growers for far longer – purchased the Résonance Vineyard in the Yamhill-Carlton AVA (American Viticultural Area, similar to a PDO in Europe or a Geographical Indicator in Australia). The vineyard is 13 hectares and some of the vines are over 30 years old, planted on their own roots and dry farmed. Interestingly although Phylloxerra is present in Oregon, it is believed that Résonance can stay ungrafted as the surrounding grafted vineyards act as a buffer to protect the vines.

The estate is on a curved south, south east and south west facing hillside and protected from the winds by Coast Range Mountains, making it a very secluded spot that can produce some very concentrated and fine Pinot. Before Jadot bought the estate, the fruit was widely used in wines made by some of the most famous names in the Willamette Valley. Jacques Lardière, who for over 40 years Jacques was the chief winemaker of Louis Jadot in Burgundy and the the keeper of their style, manages the viticulture and makes the wine. 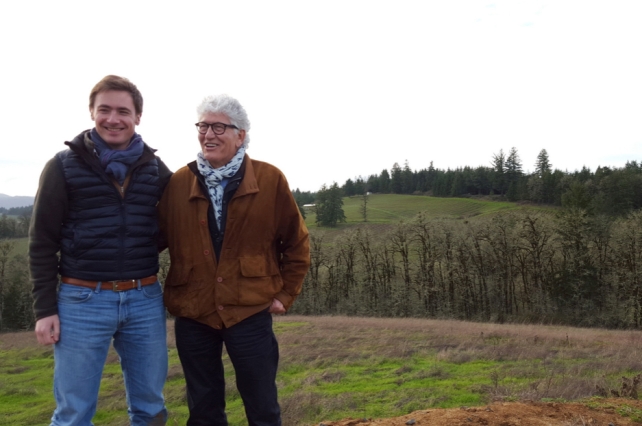 10 miles to the east in the Dundee Hills AVA Jadot also own the 7 hectare hectare Découverte Vineyard which is mainly planted to Pinot Noir but also has a small block of Chardonnay vines.

They make three Pinot Noirs on the estate, the Résonance Vineyard wine itself from the Yamhill-Carlton AVA. The Découverte Vineyard wine from the Dundee Hills AVA, which is not yet exported and this wine which is made from fruit from both of the estate vineyards, together with some fruit from other selected vineyards and so is labelled as Willamette Valley, which is the wider area.

The wine is aged for 13 months in French oak casks, 20% of which is new wood. This gives a delicate oak influence, but ensures that it isn’t lost.

I really love this wine, the colour is beautiful with that dark red fruit garnet and flashes of something deeper. The nose is lifted with deep red fruit notes, damson, rich cherry, cranberry and flourishes of blackberry and blueberry together with some orange zest. The oak gives a delicate spicy, smoky, mocha note that does not dominate, while a classic Pinot earthy quality balances it all out. All in all the aromas are rich and attractive but restrained and elegant all at the same time.

The palate is mouth filling and supple with luxurious and seductive fruit – ripe cherry, plums and raspberry together with deeper black cherry and damsons. There are some savoury qualities too like sun-dried tomato, some balsamic, some rich, freshly turned earth (mineral), a touch of spice, smoke and mocha. All of this is kept in check by the acidity that gives lovely freshness to the wine. The tannins are very much there, but they are sweet, ripe and graceful – 93/100 points.

This is a beautiful wine that seems to please pretty much everyone who tries it – I have shown it at three tastings recently and it wowed them all. In my opinion it is a perfect wine for Christmas Dinner as it would be delicious with the turkey or goose and all those complex flavours of the trimmings.

Available in the UK at around £35 per bottle from Bin Two, Handford Wines, Christopher Keiller, The Vineyard, Fenwick’s Wine Room, Hailsham Cellars, The Bottleneck, Fountainhall Wines, Frenmart, The Ministry of Drinks and Simply Wines Direct.

I seem to be a bit obsessed by North America lately – here here and here, well recently I was able to have a quick taste of some wines from America’s Pacific North West – Washington State and Oregon.