So, September has started and the summer is pretty much over. I haven’t written very much on Quentin Sadler’s Wine Page this summer because there has been so much going on. Quite apart from my work teaching people about wine I have visited some amazing wine regions, learnt a huge amount and been planning articles in my head.

However, I thought that I ought to mention a few things I tasted over the summer before you all completely forget about me. Back at the beginning of August I spent a few days in Biarritz for the first time since 1968 – when I was a very small boy. In those days I was more interested in the beach, pretty nice even now, than wine, but I was hugely excited by the local wines this time around.

The lovely old harbour in Biarritz

Biarritz
Biarritz is a splendid coastal town in south-west France that surrounds an old fishing and whaling harbour. I was really won over, it is lovely with a real feeling of grandeur, faded and real about it. Biarritz was put on the map in the 1850s by that fascinating character Emperor Napoleon 111 who bizarrely managed to be both France’s first president and last monarch. He and Empress Eugénie had planned to retire there – although is transpired that the Prussians had other plans – and the house they built still dominates the town as the glamorous Hôtel du Palais – and no, I didn’t stay there.

History and hedonistic ambience aside there are two things that make Biarritz especially interesting. Firstly it is in the Basque country and seems to have fully embraced the Basque culture – or a commercial approximation of Basque culture anyway – much more than when I was young. In practice this means that the place keeps more Spanish hours than French, so no need to dine by 7.30, the place is jumping until well gone midnight. It also means the restaurants offer a lot of ‘tapas‘, ignoring the fact that Spanish Basques use the word ‘pinxos‘ and tapas originate in Andalucia, far away from Basque country. Everywhere seems to list Spanish wines too, mainly from notionally Basque areas, but still Spanish. Indeed the only wines for sale at Biarritz airport were quite ordinary examples from Navarra which is a Spanish region claimed by the Basques. Basques do live there in fact, but they are very much in a minority. The other culinary oddity is that Paella is on the menu in almost every restaurant, which is strange as it comes from Valencia and has nothing to do with Basques at all – I suppose it sells well though. It certainly gave me a hard time as whenever I see paella on a menu, I want it – but I had to keep reminding myself to keep to local fare.

What made the trip interesting for me was the chance to try some of the wines from the disparate South-West region of France or the Sud-Ouest in French, which are the sort of wines we hear about in the UK, but don’t often get the opportunity to drink. It is a funny wine region which lumps together appellations that hug the Spanish border with others north of Bordeaux and east of Toulouse and frankly it is hard to see what they all have in common. However as Biarritz is very near the vineyards of Irouléguy I was able to taste more of them than ever before and on this brief acquaintance the area really does appear to make some good wines.

The local coperative, La Cave Irouléguy, is the dominant producer (85% of production) and although there are others it is their wines you are offered on most of the wine lists. Irouléguy is a mountainous region with a wine making history that goes back to Roman times and steeply sloped vineyards at heights that range between 100-400m above sea-level. They cling to the French side of the Pyrenees at a place where they wiggle a bit, so run north to south rather than the expected west to east. This means the vineyards face south and south east giving them much more sun than seems logical – if like me you foolishly assumed that the Pyrenees went in a straight line from the Bay of Biscay to the Mediterranean that is.

Irouléguy A.C., La Cave Irouléguy
This is a fairly juicy and supple, unoaked blend of 60% Bordelesa Beltza / Tannat, 22% Axeria / Cabernet Franc, 18% Axeria Handia / Cabernet Sauvignon. The smoky fruit and the firm tannins of the Tannat and Cabernet Sauvignon are softened somewhat by the Cabernet Franc as well as 16 months ageing in tank, but I rather like the savoury, sappy, spicy, earthy and mulberry character of the wine as these slightly hard edges together with the dollop of acidity make it good with food – 86/100 points.

Their barrel aged 2008 Domaine de Mignaberry, made from a similar blend is altogether more serious. The oak spice and the Tannat mingle rather well introducing richer earth, coffee and leather to the palate, while the fruit feels weightier and more round. I was fortunate to try a glass of it with some of the excellent local charcuterie – the wonderful Jambon de Bayonne originates in the nearby city of Bayonne (as does the bayonnet) – which was perfect with the rather attractive earthy and rustic feel of the wine – 89/100 points.

Strangely although the region is most known for its reds, they make much more rosé and the same producer’s Argi d’Ansa Rosé was a rather nice, deeply coloured dry rosé with richly ripe cherry fruit, a little spice and good weight as well as fresh acidity and luckily it was available just about everywhere in the town – including a stall in the market. I can see why they make so much of it too, it goes with a wide array of their food and the style tames the austerity of their grapes as well. This rosé was particularly good with the ubiquitous Piperade (Gascon) or Piperrada (Basque) which is a spicy ratatouillle-like dish that is served in a huge array of different ways.

Fortunately I was also able to try a glass of red from one of the very best producers: 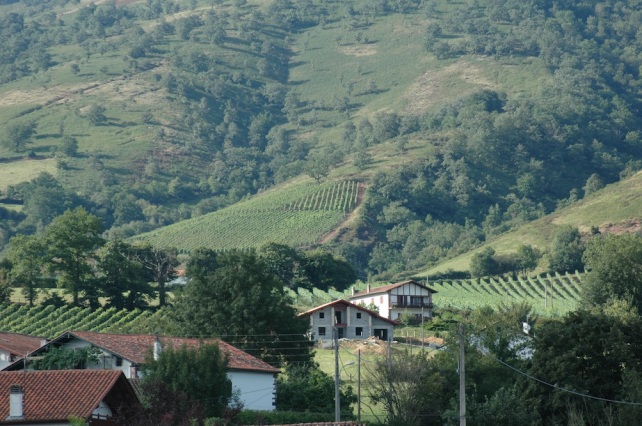 Vineyards overlooking the village of Irouéguy

2009 Domaine Illaria
Irouléguy A.C
Peio Espil makes this at his tiny 6 hectare domaine in the little village of Irouléguy that gives the region its name and is just six miles from the Spanish border. Peio farms his 30-45 year old vines organically and uses natural yeasts for his fermentations. This is his entry level wine and is a 70% Bordelesa Beltza / Tannat, 20% Axeria / Cabernet Franc, 10% Axeria Handia / Cabernet Sauvignon blend aged in old wooden foudres.
Much as I liked the others, the class and concentration showed here. It was still earthy, but more spicy with a rich savoury and even smoky, like peat, quality. There was elegance here and tension between the power and the soft tannins and fresh acidity. It was a hurried taste, but very good and left me wanting more – 90/100 points.

However, I was also very excited by the white wines that I drank. I mainly ate fish while I was there as it was so very good and the local whites were terrific, which was especially interesting as all my books describe them as being ‘modest’ if  indeed they bother to mention them at all.

2011 Xuri
Irouléguy A.C., La Cave Irouléguy
This is wonderfully aromatic blend of 70% Izkiriota / Gros Manseng, 20% Izkiriota Ttipia / Petit Manseng and 10% Xuri Zerratia / Petit Courbu with zesty citrus notes of grapefruit, lemon and pithy mandarin together with some stony minerality, cream and toast. It is oak aged in large wooden vats called foudres and this does show in the richness, while lees ageing and lees stirring adds a creamy texture to the palate. It is a nicely made, fat, but fresh and balanced dry wine showing good fruit and a pure touch of minerality to the finish and was lovely with grilled hake – 90/100 points.

I was not on a wine trip, so couldn’t actually get out to the vineyards, but what I saw excited me very much. This was a really interesting wine region that deserves to be better known, so I have decided to seek out more of the finer versions as soon as I can and to visit the area in the not too distant future.

In the meantime I will tell you about some more of my summer wines very soon.

La Cave Irouléguy wines are distributed in the UK by Les Caves de Pyrène and in the US by Chrissa Imports of California.

Domaine Illaria wines are distributed in the UK by Yapp Brothers and in the US by Charles Neal Selections.