I got very excited by this wine. The look of it really attracted me, it just looked so bright and refreshing. The only trouble is, I could not quite work out what it was, it sort of looked liked a rosé, although in truth the colour was a bit deep. What’s more the label said it was a red wine – so who knew.

In the end I just decided to taste it – and I am glad I did, because it was so delicious I made it my Wine of the Week.

The wine is made by my friends Eva and Leonardo Beconcini at their family winery in Tuscany. The estate is called Pietro Beconcini and they make superb wines that never fail to impress me. This was the latest addition to their range and I am so glad that I was able to taste it.

Wine Map of Tuscany click for a larger view.

Pietro Beconcini makes Chianti, but they also have a secret weapon. They grow a grape that is either unique to them in Tuscany, or no one else has discovered that they grow it. As well as Sangiovese, they grow Tempranillo – the Rioja grape – and have done for generations, although they only discovered what the grape was in the last 20 years or so. It is a great story and you can read all about in this piece I wrote about my visit to them. 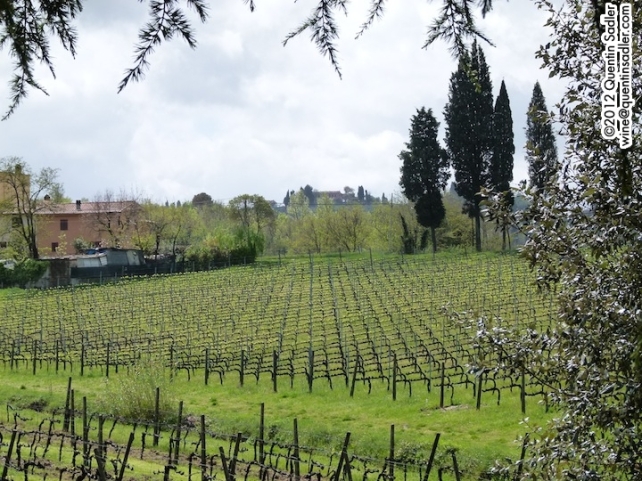 The lovely vineyards at Pietro Beconcini.

Their new wine is a light red, or a deep rosé depending on your pointy of view, that they recommend serving chilled – which I did.

This wine is a fascinating style and is made from early harvested Tempranillo grapes – picked in August in fact, their Tempranillo is usually picked in mid September. The wine undergoes a col fermentation in glass lined concrete vats and is aged on the lees in the same tanks for 4 months.

A vivid deep, but bright and concentrated strawberry red with a subtle tinge of orange.
The nose blasts soft red fruit, orange peel and blood orange aromas together with a touch of enticing spice.
The palate is fresh and generous with a creamy texture and a touch of smoke from the 4 months on the lees I expect, even a little savoury, ready, stuffing character to the mid palate. The orange and orange peel and the red fruit, strawberry, cranberry and cherry all vie with each other for the centre spot on your palate giving a fresh fruit crunch and there is a nice freshness of acidity keeping the wine lively.

You can serve this as an aperitif, treating it as a serious rosé or with food as an excellent light red. Whether it’s a red or a rosé, it is surprisingly complex, quite delicious and very drinkable – 90/100 points.

I enjoyed it with charcuterie, but can imagine it works with almost anything and whatever you have it with, this is a wine to be enjoyed.

My Wine of the Week this week is a really exciting red Grenache, or as it comes from Spain I should say Garnacha. Grenache is a Spanish grape and so should really have the Spanish name of Garnacha.

I have come to Grenache relatively late, but am making up for it as I am now tasting many delicious and exciting examples. Of course the grape is largely responsible for the famous wines of Châteauneuf-du-Pape in France’s southern Rhône, but Spain makes a lot of very fine examples too. The most famous and widely praised must be from Priorat in Catalunya, but regular readers of these pages might be familiar with he sublime wines of Domaine Lupier in Navarra.

Anyway I have recently tasted a Garnacha that is actually not produced in any recognised wine region, so it is simply labelled as a Vino de la Tierra, similar to Vin de Pays in France – my second Spanish Vino de la Tierra Wine of the Week in a row. Don’t let that lowly classification put you off though, the wine is superb.

Map of Spain showing approximate position of the Moncayo Massif – click for a larger view.

This wine is part of the Garnachas de España project which is attempting to reclaim garnet as Spain’s noble grape, to popularise it and to also bring Spain’s unused old Garnacha vines – the wild (salvaje) vineyards – back to productive life. Many vineyards were abandoned after phylloxera, some were considered too difficult to farm once tractors and other automative advances came in, in some cases families simply left the land and moved to the city. Whatever the reason, and there are many, old unused vines can be found all over most wine producing areas. This project is seeks to use this wonderful resource, just as Domaine Lupier did in Navarra.

The vineyards are grown on the north facing slopes of the Moncayo massif which is located between the Zaragoza in Aragon and Soria in Castilla y León – it straddles the Castile/Aragon border. The vineyards are high on infertile rocky soils that contain a lot of slate. So conditions are relatively cool with big temperature drops between night and day, even at the height of summer.

The grapes were handpicked and fermented in stainless steel tanks to retain freshness and fruit. The wine then ages in new French oak for 5 months, which smooths out the wine and softens the tannins.

The colour is relatively light and a vibrant crushed raspberry and blackberry colour. The nose is dominated by the fruit, bright fresh raspberry and cherry notes together with a twist of orange and soft spices. The palate is soft and lively with lots of freshness and crunchy red fruit. The tannins are soft and smooth with just a gentle smear of chalkiness on the finish and there is a little touch of minerality too. This is a happy, happy wine, soft, joyous and utterly delicious – 88/100 points.

Serve lightly chilled with almost any Mediterranean style food and you will have a very good time. I think it would be wonderful with Turkish lamb kebabs, it would even be nice to drink on its own.

Available in the UK from £6.95 to £10.49 a bottle from The Wine Society and Majestic Wine Warehouse.
US stockist information is available here.