Paella is one of the great dishes of the world. It captures Spain on a plate and is bright, evocative and exotic. It speaks of a place and tradition and although it is an absolute classic anyone can make it and even use a bit of creativity and substitute some of the ingredients.

It is a very old dish with roots going back at least as far as Moorish times and although it is now available all over Spain it actually originates in the rice fields of southern Valencia – see map of the Valencia region here.  The field workers – like barbecue Paella is even now usually cooked by men – would make a casserole of rice mixed with whatever was available – water-rat, rabbit and snails were the original classics. Local fishermen also developed seafood versions and once the popularity of this wonderful dish spread outside Valencia then people started mixing the two forms together and Paella Mixta – perhaps the most famous version – was born. The dish became more and more famous until by 1840 the word Paella had become the name of the recipe rather than the pan that was used to cook it in.

Historically paella is the Valenciano / Catalan word for any cooking pan and derives from a Latin root and the Old French word paelle – the similarities between Catalan and French are often striking. Today the pan is generally known as a paellera. 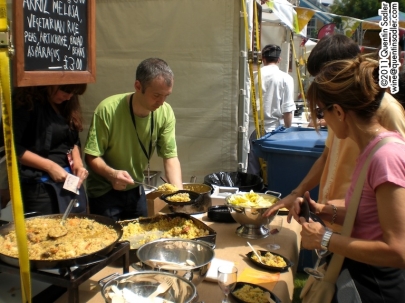 When touring Spain do try to remember that outside the Catalan / Valenciano areas Paella is as foreign to other parts of Spain as Steak and Kidney Pudding or Lasagne, so is best avoided as Spain’s other regions also have wonderful specialities to offer.

The locals will tell you that two things make a Paella great – the Valencian water and the rice. Well, I have cooked Paella in the UK often and I can assure you that the water is neither here nor there. The rice though is vital – it must be short grain and the classic Paella variety is called Bomba. If however you cannot find any, although it is widely available, do not worry I made some of my best Paellas using pudding rice – never use Basmati or anything like that though as those grains will not stick together like a true  Paella should. As well as being sticky, the bottom should be a little burnt, this crispy layer is called socarrat and is often considered the best bit by any serious Paella aficionado – thank goodness as I defy anyone to make one without burning it a little.

In Valencia Paella is not in isolation, there is a whole family of similar dishes, Arroz al Horno, resembles Paella, but is cooked in the oven. Fideuà is basically a Paella using pasta instead of rice, while the black rice dishes and Fideuàs are flavoured and coloured with squid ink.

One of my favourite Paella relatives though is Arroz a Banda, which originates on the Valencia / Alicante borders and is a simple looking dish of rice cooked in fish broth. Unlike Paella it appears quite plain, but sometimes has a (very) few prawns and pieces of squid as well as the rice – it tastes wonderful though.

Outside Europe Arroz a la Valenciana is found throughout Latin America while Arroz con Pollo is a Caribbean staple. Both of these are very similar to Paella and I think prove that Paella certainly predates 1840 as, with the exception of Cuba and Puerto Rico, Spanish involvement in these parts of the world was pretty much over by then.

Perhaps the greatest and most exciting cousin of Paella though is the equally famous Jambalaya, which appears to have been an attempt by Spanish colonists in Haiti and New Orleans – Louisiana was Spanish from 1763-1801 – to make Paella with the ingredients they found in the New World. Use a long grain rice, leave out the saffron but include some tomato and sausage when making your Paella and it is pretty much a Jambalaya.

27 March 2012 was National Paella Day in Spain and I thought that I would celebrate it by cooking a Paella and pairing it with a range of wine to see what I enjoy the most.

It is amazingly simple to make Paella, but do go easy on the saffron, personally I can find it a cloying flavour – indeed I actually use a flavouring and spice mix that includes saffron and paprika. It comes in little sachets and is called Paellero and far from being a cheat is a very normal way to make Paella. 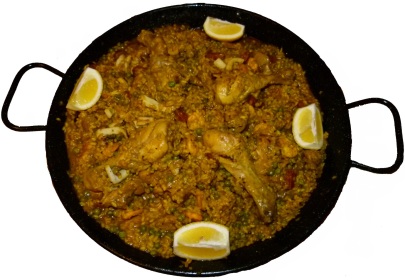 My Paella Day Paella, not the best looking one I have ever cooked, but it was very tasty

I have to admit that I had not cooked a Paella for quite a while, so was a little rusty. Added to which I did not have much time and could not find any shell on prawns to provide the dramatic decoration, but what it lacked in looks it more than made up for in taste.

What I like about wine and Paella is that almost anything can work well, so it is perfect to serve with a selection of different wines, white, red or rosé.

My selection included these whites:

Bodegas Fillaboa is a member of the Grandes Pagos de España.

A splendid example of the lovely Albariño grape that manages to combine excellent concentration and fruit with bright, zesty acidity. Albariño can be great, but often has a tendency to be a bit dilute – this is not.
The nose is vibrant with rich, almost tropical nose notes and some fennel-like herbal notes. The palate has lovely weight to it with real succulence an delicately rich pineapple and peach characters.
The wine was clean and refreshing with a feeling of purity about it together with a depth and concentration that lifted it way above the vast array of perfectly acceptable Albariños. It made a great aperitif and was perfect with the salad, my Paella however brought out a little bitterness on the finish – like black olives or tapanade. You either love that or loathe it I suspect, I loved it – 90/100 points.

£14.99 a bottle in the UK from Marks & Spencer online.
Stockist information for the US is available here.

I think white Rioja is sadly neglected, yes there are tedious examples, but barrel fermenting really suits the local Viura grape and adds a whole new dimension.
Delicate floral and citrus notes dominate the aromas, but the palate is richer with a lovely creamy quality and orange-like character and a gentle creamy, nutty character.
This weightier wine coped with the Paella rather well – 89/100 points.

£9.99 a bottle in the UK from Majestic.
Stockist information for the US is available here.

I was excited by this wine as it seemed intriguing – 100% Tempranillo, aged 14 months in oak barrels which have staves made from American oak and barrelheads made from French oak.

Of course I had to try a red Rioja with my Paella and I consider Crianza to be underrated and to provide great value for money.
This example is a lovely wine, modern, fresh and bursting with bright red cherry fruit and richer plums balanced by some lovely flourishes of spice and coffee and some really fresh, lively acidity as well as little touches of sweet coconut and vanilla. The overall effect is of a seamless and silky texture and good balance. It is medium-bodied and feels to be on the lighter end of the Rioja spectrum, but that makes it very drinkable and enjoyable.
In all honesty this would go with anything at all and please almost anyone that drinks it. I would like to try it with some lamb – 87/100 points.

£9.99 a bottle in the UK from Ocado.
Stockist information for the US is available here.

Ribera del Duero is a great wine region and home to some terrific wines. This is a single vineyard wine made from 100% Tinta del País / Tinto Fino – the names for the local clones of Tempranillo – aged 6 months in oak barrels.

This was a much deeper, darker and more intense wine. The nose was rich, but tight and mineral with earthy notes, coffee, spice and toast as well as subtle restrained blue-black fruit.
The palate was chunky and leaning towards full with blackcurrant and black plum fruit, dark chocolate, caramel and spice lightened by some stony and earthy mineral characters and some clean ripe, chalky tannins.
This was a lovely wine, quite a bruiser at first, but the Paella softened it perfectly to make it the surprising best match – 90/100 points.

All four wines went very well, which just demonstrates what a wine friendly dish Paella is and that it doesn’t matter so much what you cook as how you cook it. If I had served the reds with the prawns and calamari without the rice and other ingredients then they really would not have worked. This makes Paella a versatile and exotic dish to serve at a dinner party or lunch, what’s more in my experience it immediately introduces a sort of informal holiday mood and feeling of excitement in your guests.

Paella truly is Spain on a plate and fortunately can be enjoyed with just about any Spanish wine – so give it a try, it’s always fun.

As they say in Valencia – Bon Profit!