I don’t know how it is where you are, but this winter feels pretty cold here in the UK. Not Siberia cold, but at between 0˚ and 2˚ C in the night and hovering at around 7˚ in the day it’s quite cold enough for me. In fact it makes me want hearty stews and rich red wines. Well, the other day I tasted a red wine that is a real inter warmer and indeed I did make a hearty stew to accompany it.

It was a delicious wine and what’s more it was a Grenache, or Garnacha as they call it in Spain – after all it is really a Spanish grape. I seem to like Grenache more and more in all sorts of styles and Spain certainly produces some stunning examples. I was came from Spain, from a region that is not very well known, but that really ought to be as to makes some excellent wines. The region is Madrid, or as the wine region is called, Vinos de Madrid and I have written about the region here as well as wines from nearby here and here. It might seem strange that Spain produces a wine that I can describe as a winter warmer, but do remember that Madrid is the highest capital in western Europe and it can get pretty cold there. What’s more, this wine comes from just to the west of Madrid itself and is really grown in the eastern fringes of the Sierra de Gredos and they get pretty high, 2592 metres at their highest point, so it can be pretty cold up there in winter too. This wine though is produced in the town of San Martín de Valdeiglesias and the vineyards sit at 850 metres above sea level, which is pretty high.

That height is a good thing too, because although winter around here is cold, summer is blisteringly hot, so that altitude ensures the grapes are growing in cooler air which means the finished wine will be fresher than it would otherwise be. The town is about 70 kilometres west of Madrid and the name, Valdeiglesias, means Valley of the churches because there are a great many churches there. The region has made wine for centuries and Goya’s cartoon called The Grape Harvest is thought to depict the area. the wines of the place also get a mention in Captain Alatriste, Arturo Pérez-Reverte’s swashbuckling novel.

I really enjoyed the wine, especially after it had been open for about 6 hours. It was very drinkable and I thought that lots of people would enjoy it, so made it my Wine of the Week:

2009 Senda Las Moradas de San Martín Garnacha Crianza
Viñedos de San Martin
DO Vinos de Madrid
100%  Grenache / Garnacha, hand harvested and aged for 10 months in French oak.
The nose was rich with fruitcake aromas of raisins and spice. You do notice the 15% alcohol, which gives a touch of a dry Port like character – smelling a wine like this you can see why the aussies used Grenache to make their ‘ports’.
The palate delivers the sweetness of dried fruit, especially prune and fig, some fresh strawberry and cherry fruit too, spice, quite a punch of warming alcohol, touch of white pepper, leather, tobacco, an earthy minerality and a touch of brown sugar or caramel. The palate is very smooth, almost creamy and mouth filling with soft tannins that have a sweet ripe, fine grain character.
I like this wine, you can taste the heat, but the palate recovers its balance and the finish is long.
It really quite is quite delicious, a bit of a monster and not my normal style at all, but it has bags of personality and I think a lot of people would like this very much indeed 89/100

Try this with a heart meaty casserole or cassoulet type dish.

Available in the UK from Grey’s Fine Foods at £11.75 per bottle. Greys also sell a wonderful range of Spanish foods, so you could always order some Jamón too!
Available in the US from Saratoga Wine Exchange.

Los Caracoles in Barcelona, you enter the restaurant through the back of the bar... 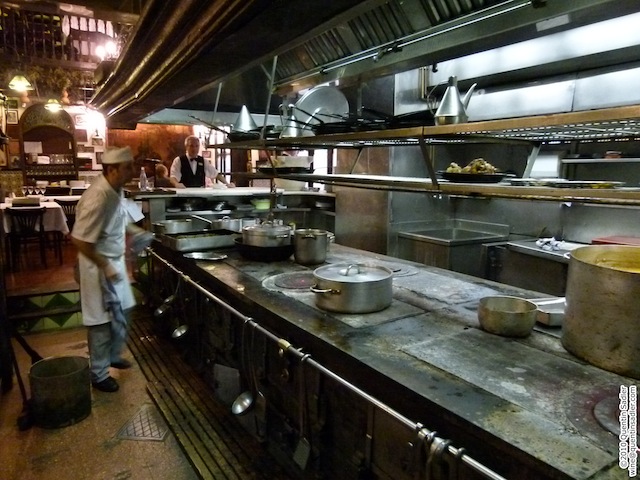 ...and go through the kitchen to your table

I love Spain and am passionate about Spain’s food, wine and history, so I wrote a very personal piece about Spanish food and some very traditional restaurants and I think you might enjoy it, its published on Catavino.com and you can read it here

Vinos de Madrid presented their first ever London event on 1st July 2009. It took place in the Century Club on Shaftesbury Avenue and was a great chance to try some wines from a region that was entirely new to me.

Firstly there was a mini wine fair tasting with wines from 9 of the 45 producers in the region. This was followed by an excellent tasting and presentation led by John Radford.

I found the wines to be generally of high quality and with some real flashes of elegance and refinement. Although wine has been made here for centuries, for the most part these were not traditional wines, but stylish, well crafted modern wines with abundant fruit and good balance. There was not a single over extracted, over oaked Parker points follower amongst them – although some acheive pretty high Parker points anyway! END_OF_DOCUMENT_TOKEN_TO_BE_REPLACED

I had heard about it for years, I had even read about it, in guide books and on the web, but I had never been there. Given a day in Madrid I decided to change that.

I am talking about the the world’s oldest restaurant, the famous Botín. It has always appealed to me, really traditional Spanish restaurants just do, they have an attraction to me that I cannot really define. I think it is the way the menus never change, food in some cultures is not an evolving art form, but a commitment to their past, almost an anchor to their traditions. Well good traditional Spanish food can be just that and I love the experience when it is done well, it is like being in a really good interactive museum.

END_OF_DOCUMENT_TOKEN_TO_BE_REPLACED

The other week I was in Madrid and wanted somewhere classically Spanish, good quality and inexpensive to eat.
Well, my prayers were answered in the shape of the Museo del Jamon. There are some 5 branches of this strange hybrid of an establishment dotted around the centre of Madrid, I went to the original, in the Calle Mayor, just off Puerto del Sol.
It appears at first glance to be an overgrown deli, ham and cheese shop, but a closer look will show you that half the ground floor is also a rather excellent tapas bar, of the stand up variety. Just above this on a sort of mezzanine is a snack bar, while a staircase takes you to the “comedor”, the dining room. END_OF_DOCUMENT_TOKEN_TO_BE_REPLACED