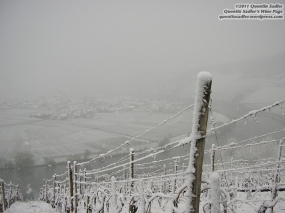 The Mosel - slate slopes and a cool climate

Wine tasters and wine trade people often talk about minerality in wine – possibly too much, but I have always assumed that it means something, even though spell checkers hate the word. However I often come across people who find it hard to understand the term in reference to wine and yesterday I met someone who positively hates it.

Minerality to me describes many of those characteristics in a wine that are not fruity – yes there are some – especially in youth before the aged leathery or honeyed characters take over. Some wines are blindingly mineral, like the terpene/petrol notes of Riesling and a few other grapes. Some are chalky, in others you would swear that you can taste granite, iron, flint or slate, while others are more vaguely mineral. It is slightly confused, because scientific research seems to say that the vine does not deliver actual mineral flavours from the soil in which it grows – so where does it come from? It is possible that it is sometimes the acidity and sometimes the sensation of the tannins, but is it also possible that it is an utter flight of fantasy? A case of grasping at straws?

Not everyone agrees that vines do not pass on some characteristics of the soil though, I know that Jacques Lardière of Louis Jadot, for one, believes that his wines physically carry mineral characters and is convinced this happens because microorganisms in the soil dissolve minerals in the bedrock, these leech into the water and so become absorbed by the vine. I know this has not been proved, but doesn’t it make sense? Surely it explains why some soils seem to impart their minerality to the wines that grow in them? Whether we taste specific minerals though or just pick up a general mineral-like character is a more open question to my mind and might well vary from wine to wine.

All I know for a fact is that some wines taste and smell like stones – wet stones, hot stones, slate, hot granite, chalk and like sucking pebbles or licking slate. Earthy too, isn’t that mineral? If minerality in wine is a myth, then why does a Beaujolais-Villages have a granite-like bitterness, while a Beaujolais, from chalky soil is all about acidity and why a Cru Beaujolais from Morgon will often deliver a different character again that is supposed to come from the manganese in the soil.

If mineral characters cannot end up in wine it would be peculiar that we all seem to mention it in tasting notes and know what we all mean in the wine world. There was a gentleman at my tasting last night who was a scientist and he hated the term minerality. I pressed him as to why and he said that as rocks have no vapour pressure they have no smell or flavour. At least that is what I think I understood!

In my time for various reasons I have smelled various stones and I have to disagree, they do have vague and subtle aromas. Sniff a gravel drive, then sniff it again when it is wet – it has a smell. Slate has a smell and a taste, as do many other things, including earth – although my experience of tasting it is very limited. I always ask my students to suck a pebble as I think that gives a clear idea of what we wine folk mean by minerality. At school we sucked pebbles to quench a thirst on cross country runs – hopefully clean ones.

I feel slightly nervous about taking this further as I have a suspicion we are approaching the terroir question, the great deity of wine, or article of faith anyway. Terroir is a very French thing, we apply it more widely now, but really it is a French concept and tradition. Terroir is non-specific in many ways as it applies to many different things to do with wine, but at its heart is the soil in which a vine grows. I once memorably heard terroir described as ‘everything we don’t understand’ and another time as ‘French for no fruit’, but I have a hunch that it overlaps quite a bit with minerality.

The great terroir wines come from cooler rather than warmer places – so do the wines we traditionally describe as mineral. Take just two examples that are typically described as mineral; Pouilly-Fumé and Chablis. They both come from cool places where the climate delivers delicate wines where the flavours of the grape are not the most dominant character – the exact opposite of how those same grapes perform in hotter and sunnier climes. There the fruit flavours of the grape dominate the wines and mask the other nuances – those dissolved minerals? In Pouilly-Fumé and Chablis, as well as many other – mainly European and all cool climate – wines, it is surely a minerality that is the most blatant characteristic, the goût de terroir if you will?

All we need to know now is whether minerality in wine exists, where it comes from and how to describe it.

Feel free to comment, I would love to hear what other people think about all this.

57 thoughts on “Minerality in wine – flight of fantasy, fact or terroir?”