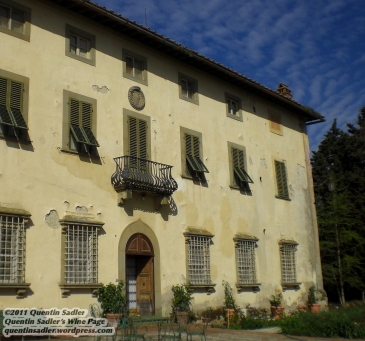 Carmignano is a village in Tuscany that produces D.O.C.g wines and my recent trip to Italy included a visit to the leading producer – Tenuta di Capezzana – which can boast a long and noble history. 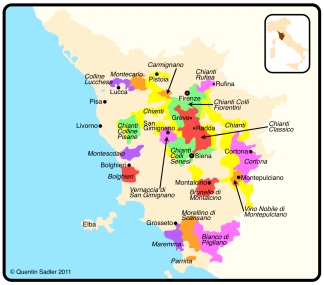 Wine Map of Tuscany - click for a larger view

You can be forgiven for not having come across it before as it is a small wine region of barely 100 hectares and 20 producers in a beautiful valley 16 km west and slightly north of Florence.

In many ways Capezzano is the heart of Carmignano as the estate produces nearly 50% of the total of the D.O.C.g. and the Contini Bonacossi family that own it were largely responsible for the area achieving D.O.C. status in 1975 – until then the wines had been sold as Chianti, so the qualities that set them apart had been somewhat lost.

Which is strange given that the potential of the place to make wines that are appreciably different – terroir wines if you like – has long been recognised. Artifacts such as jugs and cups illustrate that the Etruscans were making wine in Carmignano from around 1000 B.C., while records show wine and olive oil actually being produced at the Capezzano estate by 804 A.D.. 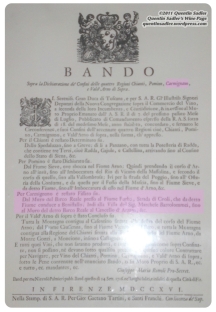 The edict of 1716, details of Carmignano are highlighted

Intriguingly Carmignano can sort of claim to be one of the oldest appellations in the world as in 1716 Cosimo III de’ Medici, the Grand Duke of Tuscany, issued an edict identifying four districts of Tuscany that produced outstanding wine. This stipulated the areas covered by the wine names and forbade the use of those names by other places. The four districts were Chianti, Pomino (Rufina), Carmignano and Vald’Arno di Sopra, the last of these has disappeared as a fine wine region, but it seems that just this month (April 2011) application has been made for it to become a D.O.C.. 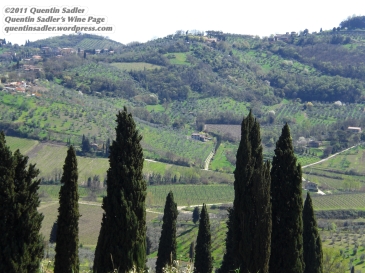 Views of the estate

Tenuta di Capezzana is very beautiful with terrific views down the valley towards Florence – when I arrived there was quite a bit of fog hanging around which prevented me seeing that city’s Duomo in the distance, but I was able to take a blurry photo of it later. The house was lovely too and has quite a history of its own; built in the early Renaissance as a holiday home by Monna Nera Bonaccorsi it was remodeled and altered over the centuries, eventually becoming property of the Bourbons (I resisted making biscuit jokes and so must you). Finally Alessandro Contini Bonacossi purchased it in the 1920’s and also bought some of the surrounding farms to increase the size of the estate as he had big plans to concentrate on wine and olive oil production.

However in 1932 the edict of 1716 was replaced by the Dalmasso Commission which drew up the regulations that created the Chianti Classico – an entity that covered the original Chianti zone between Florence and Siena. In the process they awarded use of the Chianti name to a much larger area, albeit without the Classico suffix. The area had apparently used the name of Medici Carmignano until then, but suddenly their wines were lumped in with the Chianti Montalbano sub-zone.

Believing history to agree that their wines should not be part of Chianti the family struggled on trying to win back the right to use their own district name for their wines and they were eventually granted D.O.C. status in 1975 and promotion to D.O.C.g followed in 1990, for the 1988 vintage. 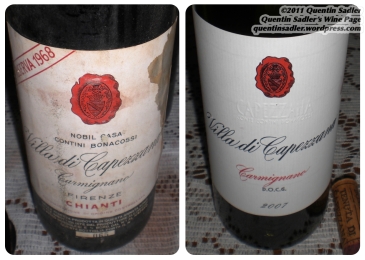 Evolution of the labels

It seems natural to me that this is a wine on its own, they just do not taste like Chianti Classico, Chianti Rufina or even nearby Chianti Montalbano and the reasons are climatic as well as because of wine making choices.  Firstly at just 50-200 metres above sea level the hills are low compared to Chianti Classico at 250-600 metres and up to 900 metres in Chianti Rufina – the Roof of Chianti. This makes the place hotter creating good ripening conditions which lower the acidity of the Sangiovese grapes and also firms up the tannins somewhat.

Local folk lore would have us believe that Catherine de Medici brought French grapes varieties, Cabernet Franc in fact, to the region and the local wine makers found it worked well in a blend with the traditional grapes. Who knows the truth behind this, but certainly Cabernet Franc and later Cabernet Sauvignon were in use here in the late eighteenth and nineteenth centuries, only disappearing as a result of phylloxera. This moribund tradition was one of the reasons for the rebirth of Carmignano as a separate D.O.C. in 1975, so this was the first Tuscan wine to officially allow Cabernet Sauvignon and Cabernet Franc in the blend. Apparently Tenuta di Capezzana imported Cabernet Sauvignon cuttings from Château Lafite in order to make this possible, although they certainly had some before that as you will see.

The regulations for Carmignano D.O.C.g. stipulate the blend should contain a minimum of 50% Sangiovese together with up to 20% Canaiolo Nero and a maximum of 20% Cabernet Franc and/or Cabernet Sauvignon.

Wines made from younger vines and declassified wine can be labelled as Barco Reale di Carmignano D.O.C.

It was a real privilege to be treated to a vertical tasting of their iconic wine – Villa di Capezzana presented by their winemaker Benedetta Contini:

Deep and opaque, the colour of black fruit
Black fruit powers out of the glass – cassis with hints of tight, spicy oak.
The palate was fresh, rounded, smooth and minty with slight chalky tannins.
Very nice, elegant and balanced medium bodied wine. Tannins come through on the finish more than the front palate leaving a little bitter dryness and a feeling of hardness. It has lovely lightness and balance, freshness.
This is a lovely, delicious wine, not showy at all, but very elegant and good. At the moment it struck me that the firmness of the Cabernet is really dominating and although I could drink it now, it would soften with time and just get better and better. I really like wines like this, although it is rich and concentrated there is real freshness and balance too – 90/100 points.

Deep colour still with just the merest hint of some tawny around the rim.
Smoky nose offering creamy ripeness too, oak spice with coffee just beginning to develop.
Some gamey notes, but the black fruit is still dominating.
The palate was medium bodied plus with blackcurrant and black cherry fruit really filling out the palate, the Cabernet still seems to be dominating. Some acidity makes it elegant, while the tannins are just a drying smear, still there but very soft indeed and balanced by the fruit.
Nicely structured wine with still some lovely freshness, fruit and balance
Very good, if not what I was expecting at all with the emphasis on balance and finesse – 91/100 points.

Just beginning to go bricky around the rim.
Gamey nose with sweet fruit notes, hints of red fruits too – the Sangiovese bursting through the Cabernet perhaps?
The palate was very dry with the fruit decaying somewhat, leaving a slight varnish feel, which was then washed away by some stewed fruit weight making the palate feel fresh until the drying touch of tannins takes over right at the end.
It would be very good with some food, but was still a little disappointing after the two previous wines. It is possible the wine was going through its difficult teenage phase and will emerge triumphant in a year or two – 88/100 points.

Sadly this bottle was corked.

Orangey brown colour.
The nose was of singed meat and old books – there was a pleasant fustiness to it, together with a floral note like a lilly and a little coffee too.
Good weight on the palate, coffee, toffee and caramel come through together with the sweetness of dried fruit. Lovely intensity balanced by the freshness and still a ripe creamy quality to the finish.
It just got better and better, with still enough of everything, even a dash of tannins on the long, rich, concentrated prune like finish. A great wine and wearing better than almost anything from that era – except Donny Osmond – 93/100 points.

The colour really showed its age with a more brown, brickyard, burnt Siena look.
A somewhat medicinal nose of iodine, soy sauce and cold coffee also had a rich figgy and dried fruit quality.
Quite round and complete, but nothing really stands out, a bit of a ghost really. Leathery and savoury palate with the fruit having faded just leaves some acidity and a smear of tannins on the finish.
It is amazing that it is still here and it is ageing much better than me, but I didn’t love it – it just seemed a little tired and lacking in comparison to the others. I must confess though that I was on my own here, a few of the other tasters thought this wine was near perfection, so don’t just take my word for it – 88/100 points. 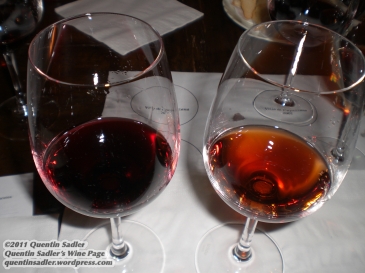 1931 Villa di Capezzana
I presume this was originally sold as Medici Carmignano, but the label was only applied in 1966 and simply calls it Villa di Capezzana
70% Sangiovese, 15% Cabernet Sauvignon and 5% Canaiolo Nero with other traditional varieties – 30 months in 2500 litre oak barrels

Translucent, brown, nutty toffee colour.
Savoury, gamey notes on the nose, like deep concentrated consommé with hints of figs, coffee and salami.Not much fruit on the palate, but still alive with good structure, loads of acidity which keeps it going. Meaty savoury, umami flavours with even a little bit of tannin on the finish. Amazingly long, it would be lovely with food, but nothing too flavourful. Mushrooms, orange peel and walnuts as well as salami and a touch of coffee bean on the long finish.
Incredibly good considering it is so old, still enjoyable and drinkable – so I drank it – 92/100 points. 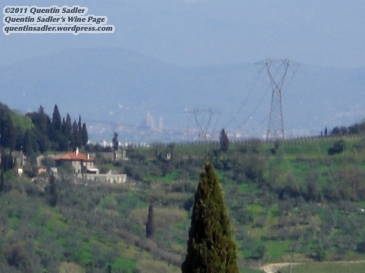 I really enjoyed visiting this estate, I liked the place, I liked the people and they gave me a wonderful lunch, but above all I liked and admired the wines. They were quite distinct from the rich, overtly fruity modern Chianti Classicos, with none of the rusticity of the traditional style nor the astringent and hard tannins that can need long ageing in Chianti Rufina. Villa di Capezzano seemed to me to offer superb balance between fruit and concentration on one hand with finesse and elegance on the other and I will certainly be drinking them in the future.

Villa di Capezzana wines are available in the UK from: AG Wines, Liberty Wines, The Good Wine Shop and Majestic among others.

12 thoughts on “Tenuta di Capezzana – the beating heart of Carmignano”