My favourite tasting of the year so far was the Blandys Madeira seminar and I had no expectation that I would go to anything so wonderful again in 2011 – how wrong I was. Barely a fortnight later I was completely spoilt by another line up of amazing Portuguese fortified wines. This time it was Port and I was totally won over.

Our hosts were the effortlessly charming Johnny and Paul Symington whose family have been Port merchants for the best part of two hundred years and own most of the really great Port brands including Graham’s, Dow’s, Cockburn’s and Warre’s. 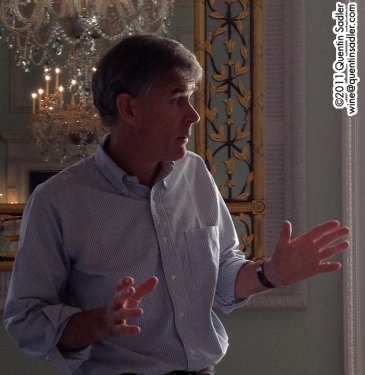 Remarkably though they can trace their involvement in the Port industry back through 13 generations to 1652 when Walter Maynard, Oliver Cromwell’s representative in Lisbon, exported 39 pipes of Port wine. Walter later settled in Oporto, married a Portuguese lady and one of their descendants married into the Symington family in 1891, but it seems that a good many others had married into various other Port houses along the way.

In recent years the family’s focus has been in expanding their portfolio of vineyards in the Douro Valley so that they control every aspect of their Port production. As Paul Symington told us, in the past they and all the other famous brands were more like negociants, shippers in Port parlance, than a domaine but that is less and less true today. As Paul told us, they have become farmers rather than merchants.

In fact this tasting was all about vineyards as the subject was their Single Quinta Vintage Ports. A Quinta is a wine farm or vineyard with a house and winery on it and the Symingtons now own 26 of these throughout the prime Port lands of the Alto Douro. By some strange oversight in my career I have never visited the Douro, but from the photographs they showed us it looks a stunningly beautiful place.