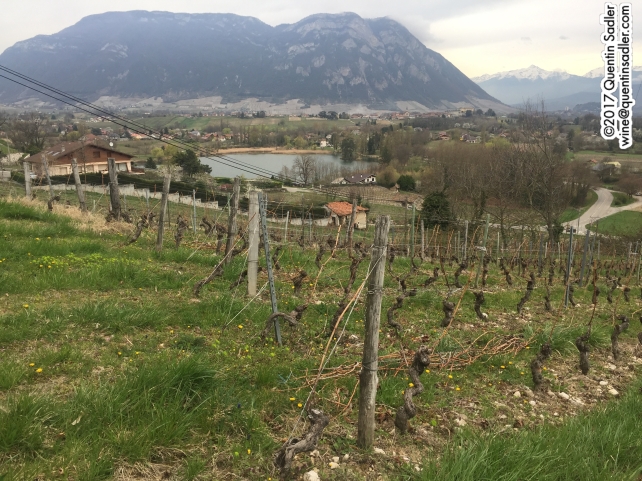 The beautiful landscape in Savoie.

I really like sparkling wine and so I jumped at the chance to attend the 26th National Crémant Competition in France. This was held in Savoie in the French Alps, a region that I had never visited before, and hosted by the (French) National Federation of Crémant Growers and Producers.

Crémant (pronounced cray-mon) is a term that defines certain sparkling wines made outside France’s Champagne region, but uses the same method, the traditional method, to make them fizzy. I think Crémant is a lovely word that describes sparkling wines perfectly as it sounds so deliciously creamy and frothy. 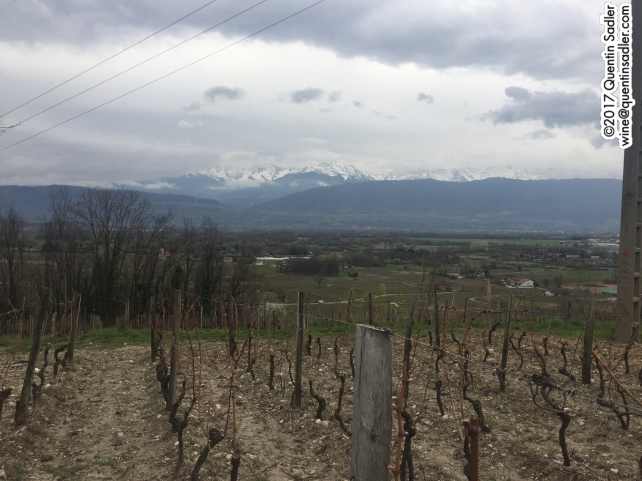 I loved the landscape of Savoie.

Crémant must be made using the traditional method, so the second fermentation – that makes it fizzy – takes place inside the bottle that you buy. The wine then has to be aged on the lees – the yeast cells left over from the second fermentation – for at least 9 months and this allows some of the biscuity, brioche aromas and flavours to develop, making the wine more complex. Also the grapes for Crémant must be picked by hand and they are normally picked about 2 weeks before the grapes for still wine as you need high acidity for sparkling wine.

Some of these areas have pretty big production and so are widely seen, while others are only produced in tiny amounts and so very rarely encountered. Overall around 80 million bottles of French Crémant are produced a year, with roughly 70% of that being drunk in France itself, which makes sense as we do not often see it over here in the UK.

Champagne of course is made from Chardonnay, Pinot Noir and Pinot Meunier grapes, but a wider palate of grape varieties is used for the Crémant wines. 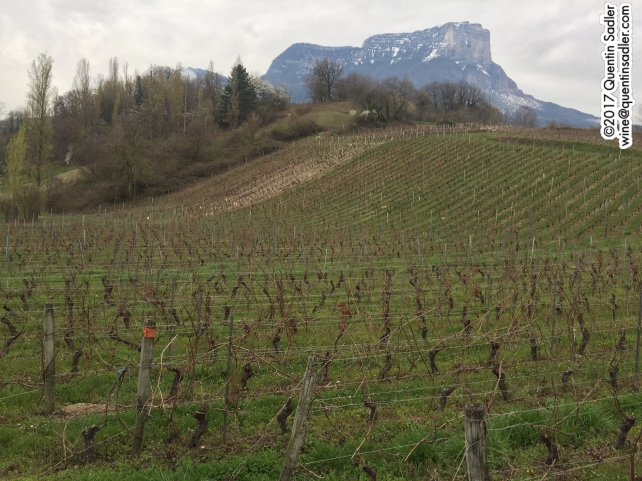 The dramatic vineyards of Savoie.

Crémant de Bourgogne wines have to include at least 30% of Chardonnay and Pinot Noir and are usually made from those grapes, but Pinot Blanc, Pinot Gris, Gamay, Aligoté, Melon Blanc and Sacy are also permitted. Rather confusingly the area of production for Crémant de Bourgogne includes Beaujolais, which nowadays is normally regarded as a separate region.

Crémant d’Alsace is usually made from Pinot Blanc and the rosé versions from Pinot Noir, but Riesling, Pinot Gris, Auxerrois and Chardonnay are also permitted. In fact Chardonnay is only grown in Alsace for use in Crémant.

Crémant de Loire, as you might expect, is chiefly made from Chenin Blanc and Cabernet Franc, but Chardonnay and Pinot Noir can be used as can Grolleau Noir, Grolleau Gris, Pineau d’Aunis and the very rare Orbois (also called Arbois).

Crémant de Bordeaux is made primarily from Sémillon with Sauvignon Blanc and the rosé examples include Cabernet Sauvignon and Merlot.

Crémant de Limoux, in the Languedoc, is made from Chardonnay and Chenin Blanc, while the local Mauzac and Pinot Noir are also allowed.

Crémant de Jura is usually made from Chardonnay, Pinot Noir and Trousseau, while Poulsard makes an appearance in the rosés.

Crémant de Die is pretty much only made from the underrated Clairette grape, while Aligoté and Muscat can also be used.

In total some 707 wines were entered into the National Crémant Competition, including 80 entries from Luxembourg, and 222 medals were awarded, 129 gold, 74 silver and 19 bronze. 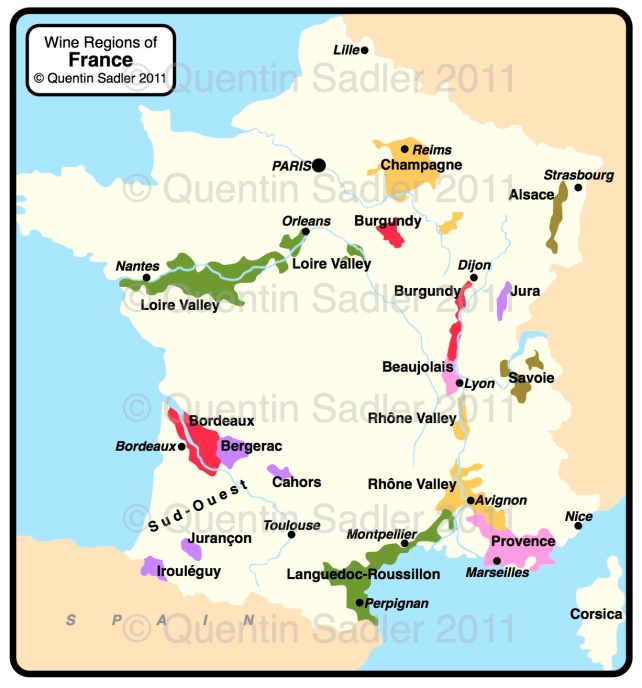 Wine map of France – this shows all the regions mentioned, except Luxembourg – click for a larger view.

It was the job of people like me to blind taste the top rated wines in the competition again and to choose the very best to award the Prix de la Presse for each Crémant region. The winners were:

A blend of Pinot Blanc and Auxerrois and aged for 15 months on the lees.

Cattin was established in 1720 and 11th generations of the Cattin family have run the estate.

They are based in the village of Vœgtlinshoffen, near Colmar and farm 60 hectares in the area.

As far as I can tell this wine is not available in the UK. Another excellent Crémant d’Alsace is the one made by Bruno Sorg – click here.

100% Sémillon aged minimum of 9 months in the underground cellars of Maison Remy Breque.

The company is based a little north west of Libourne and the cellars were where the stone was quarried for building the city of Bordeaux.

The company was created by Remy Breque in 1927 and is now run by his grandson and great grandsons.

As far as I can tell this wine is not available in the UK. Another great value Crémant de Bordeaux is the one made by Calvet – click here.

This cooperative is a little south west of Castillon-la-Bataille.

As far as I can tell this wine is not available in the UK.

This cooperative is based in Saint-Bris-le-Vineux near Auxerre in the north of Burgundy. It has 10 acres of amazing cellars cut in to the rock , where they age the Crémants.

This is 100% Pinot Noir, so is a Blanc de Noirs, or white wine made from black grapes. It is aged for 18 months on the lees.

Available in the UK from Tannico.co.uk. – click here.
Another very fine Crémant de Bourgogne is the one made by Albert Bichot – click here.

Principally Clairette with some Aligoté and Musact, this is aged on the lees for 12 months.

Cave Carod were a family company making sweetish sparkling Clairette de Die and are managed by the 4th generation of the Carod family tone involved, although it has been owned by Les Grands Chais de France since 2008.

As far as I can tell this wine is not available in the UK, however I would recommend the lovely example made by Domaine Achard-Vincent – click here.

The Maison du Vigneron is the largest negotiant and producer in Jura and is now part of Les Grands Chais de France. I have tried their wines quite often and they can be very good. This is a blend of Pinot Noir and Poulsard grapes.

A blend of Pinot Noir and Trousseau.

This is the smallest cooperative in Jura and is run more like an estate. They farm using sustainable agriculture and 50% of their production is their range of four highly respected Crémants.

As far as I can tell this wine is not available in the UK.

Jura wines are quite fascinating and well worth getting to know. The definitive book on the wines of the Jura is ‘Jaura Wine’ by Wink Lorch and yours truly drew the maps for the book – it can be purchased here and here.

A blend of Chardonnay, Chenin Blanc and Mauzac aged 18 months on the lees. 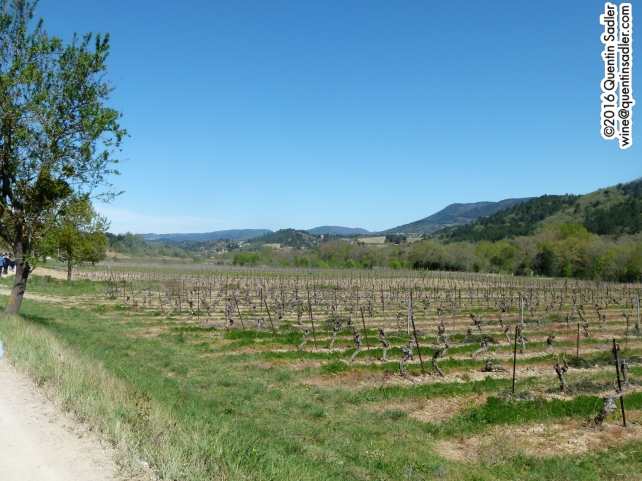 Sieur d’argues is a cooperative producer that makes a wide range of wines, some of them very fine indeed, but who really specialise in sparkling. This is because the first intentionally sparkling wine in the world is believed to have been made by the Benedictine monks of the St Hilaire Abbey, a village close to Limoux in 1531. What is more it was by the traditional method and so that method predates Champagne itself.  Blanquette de Limoux is the traditional local sparkling wine made from the local Mauzac / Blanquette grape, while the more modern Crémant de Limoux has to be blend of  Chardonnay and Chenin Blanc with just a little Mauzac.

100% Chardonnay with 12 months ageing on the lees.

Domaine de la Gachère is some 20 km south of Saumur and is run by twin brothers Alain and Gilles Lemoine. They are very impressive winemakers.

This estate in the beautiful Luxembourg Moselle vineyards is farmed by the Vesque family who have been vigneron in the Grand Duchy since 1762. They grow Auxerrois, Pinot Blanc, Pinot Gris, Pinot Noir, Riesling, Chardonnay and Gewürztraminer and make their Crémants out of Pinot Blanc, Auxerrois and Riesling as well as Pinot Noir. 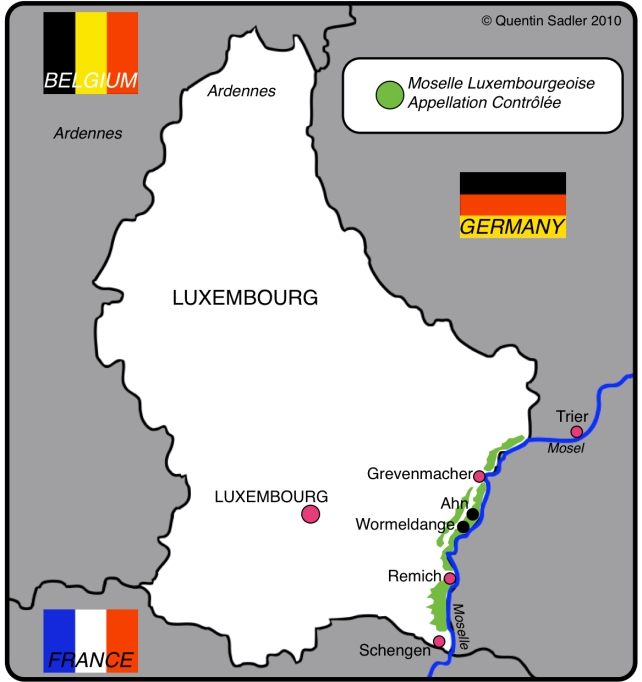 Map of Luxembourg’s vineyards – click for a larger view

As far as I can tell this wine is not available in the UK and it is very hard to find Crémant de Luxembourg wines over here, however Tanners stock a fine one called Lmeaax – click here.

100% Jacquère from a wonderful, steep and stony 22 hectare estate whose wines I loved. It is run by Michel’s sons Guillaume and Romain and is among the best known and respected producers in the region. Certainly I liked everything that I tasted, they have a wonderful Alpine purity to them that find appealing and exciting. 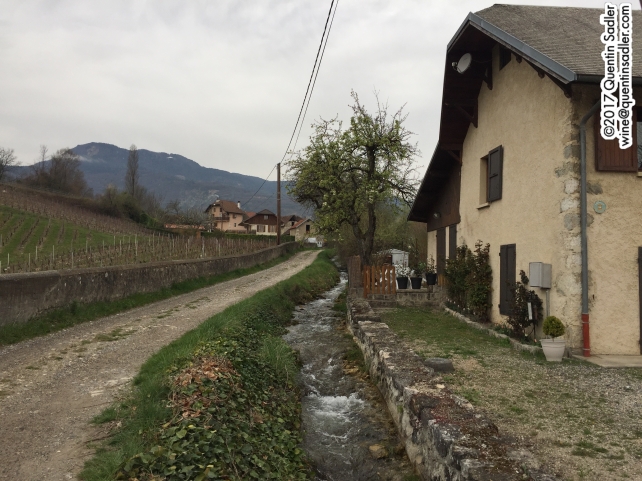 As far as I can tell this wine is not available in the UK and it is very hard to find Crémant de Savoie wines over here, however Yapp Brothers stock a fine one from Domaine de L’Idylle, also see here, whose wines I liked very much – click here. It is also available at the excellent Streatham Wine House.

All in all it was a terrific trip that enabled me to see a new place and to taste a huge raft of sparkling wines,many of which were completely new to me. So, the next time you want some good fizz, it doesn’t have to be Champagne, Cava or Prosecco, there are plenty of alternatives.