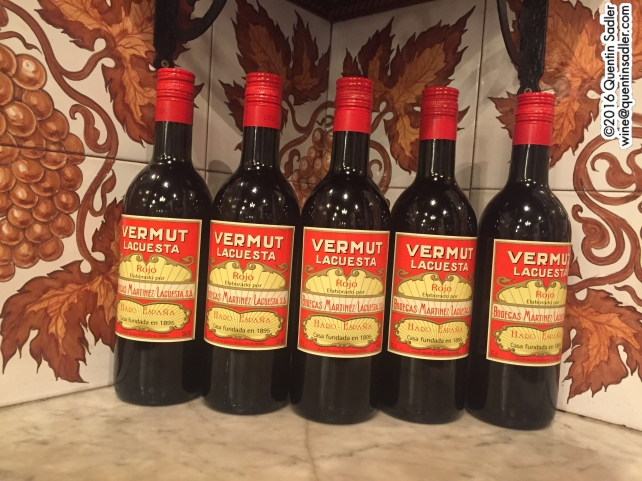 The Vermouth display at La Casa del Abuelo in Madrid.

Until recently I could not remember the last time I had drunk any Vermouth. In my early years I used to sell it and it was so fashionable that it was positioned right at the back of the shop, next to the equally popular Sherries and Tonic Wines – ah the early 1980s really were another country.

Recently though I have started becoming aware of Vermouth being much more visible than I can remember for a very long time – I suppose it might be because of the big trend for Gin and Martinis, whatever the reason it is fascinating to see this old favourite having a resurgence, however modest.

A Vermouth is a fascinating wine style – even if you don’t like them. It is both a fortified wine and an aromatised wine.

There are four components in the making of Vermouth:

Herbs, roots, plants and spices to give the flavouring – the most historically important flavouring is the wormwood shrub, wermut in German – pronounced vermut – from which the drink gets its name.

It is worth noting that like gruit and hops in beer, the herbs and spices were originally meant to act as a preservative and to have medicinal purposes too, not just to be a flavouring, in the distant past they probably covered up the smell and taste of some pretty rank wine too!

How you make Vermouth:

The base wine is sweetened with the sugar syrup or the mistelle. The herbs are macerated in the spirit and this flavoured alcohol is blended into the sweetened wine – it can then be aged for complexity or left as it is for freshness.

Apparently the first Vermouth to be bottled and sold was created by Antonio Benedetto Carpano in Turin, Piemonte, in 1786. His invention was the first commercial red Vermouth and a form of it is still available as Carpano Classico Vermouth, while a newer recipe, called Antica Formula Carpano caught my eye recently and that has gone for a bigger flavour and the artisan look, so much so that you could be forgiven for assuming that it is the older product.

All other commercial styles – as opposed those made by farmers for their own consumption – seem to have been based on what Carpano created and white, rosé and drier styles followed over time. White Vermouth was apparently created by Dolin in Chambéry in Savoie in 1821. Interestingly Chambéry is just over the Alps from Piemonte and in 1932 Chambéry was created an appellation contrôlée, or PDO, the only one for Vermouth. In my youth I remember enjoying Dolin’s Chamberyzette – available here and here, this is their white Vermouth blended with wild Alpine strawberry juice – I used to love, perhaps I still would if I tried it?

I bet you are wondering where this is leading, well recently I was in Madrid and was having a happy time in one of the great bars of that city of great bars, La Casa del Abuelo – the original one at 12 Calle Victoria. This Madrid institution has been around since 1906 – it seems that Ernest Hemingway was a frequent visitor during the 1920s and ’30s, but then every bar in Madrid claims that, and he drank so much they may well all be right – and it only serves prawns. The other branches have bigger menus, but the original one only serves gambas done six different ways. The classics are Gambas al Ajillo, Gambas a la Plancha, Langostinos con Gabardina (big prawns in batter – hence gaberdines or overcoats! They rather wonderfully translate it as muffled shrimps) and their Croquetas de Gamba Roja (red prawn croquettes – they’re really good).

They have a small wine list nowadays, but the first time I went there – some 30 years ago – they only served 2 drinks, both of which are still available, a sweet red wine or a red Vermouth.

Well on my recent rip I ordered the Vermouth because a friend had mentioned this particular drink to me – he actually ships it into the UK, and I was intrigued. I tried it and really enjoyed it, so have made it my Wine of the Week.

I have long been an admirer of Bodegas Martinez Lacuesta. Founded in Haro in 1895 they have quietly got on with making superb wines ever since. They produce four different wine ranges, the classic Martinez Lacuesta wines and the somewhat funkier Comprador range which have more Garnacha in them than Tempranillo – Garnacha is usually very much in the supporting role in Rioja. Nowadays they also make make some excellent speciality Riojas and a couple of white Ruedas.

‘Vermut’ is a real speciality of the bodega – they have been bottling it since 1937, but I bet it has been made since the beginning. Nowadays they actually produce five different Vermuts, Blanco (white), Reserva Roble Francés (Reserva aged in French oak), Reserva Acacia (Reserva aged in acacia wood barrels) and a Limited Edition – Vermut Edición Limitada – which is aged in barrel for 14 months.

However, it is the Rojo, or red Vermut, that is the mainstay of their Vermouth production. It is all hand made in small batches from grapes grown in Martinez Lacuesta’s own vineyards. The twist here is that the botanicals, herbs etc, are added to white wine and then aged in American oak barrels for three years – this also introduces sweet vanilla flavours that show up in the finished Vermouth. This mixture is then added to the base red wine along with sugar, caramel and alcohol and aged in French oak barrels for another three months.

The nose is very complex with spices, herbs, dried fruit, toffee, vanilla and camomile. The palate is mellow with sweet dried fruit and an attractively herbal and medicinal character. There is plenty of richness and sweetness, but that is balanced by the herbs and touch of bitterness.

I actually found it really appetising, invigorating and unexpectedly satisfying. I don’t think it went with the gambas, but it was a good drink. I drank it neat with ice, but I am willing to bet it would be delicious with a slice of orange and a splash of sparkling water or lemonade, or even some orange juice – 88/100 points.

In the meantime, Vermut Lacuesta Rojo is available in the UK from Basco – formerly Greys Fine Foods – for £13.50 a bottle.
For US stockists click here.

Since returning from Madrid I have discovered that Vermut Lacuesta Rojo makes a superb Marianito cocktail – simpler recipes are available:

Preparation: Put all the liquid ingredients in a mixing bowl with ice. Mix without shaking and serve with more ice and remember to add the olive, although I prefer a slice of orange.

Wandering around Madrid I quickly realised that Vermouth is now big in Spain and is produced right across the country. There are plenty of examples from Catalunya, even from Priorat, some from Jerez, including those made by Bodegas Lustau, Cruz Conde Vermouth made from Pedro Ximenez in Montilla-Morilles, Ribera del Duero and there is even a Galician Vermouth made from Albariño grapes and I intend to taste as many as possible in my forthcoming visits to Spain.

It is amazing to think that this drink that I had almost forgotten about is enjoying such an exciting renaissance and giving so much pleasure. If you are open to interesting and complex drinks, do give one a try soon.