Bien Nacido Vineyard in the Santa Maria Valley – photo courtesy of the vineyard.

I do quite a lot of teaching at The West London Wine School – Wine and Spirit education Trust / WSET Courses mainly, but every now and again we hold a tasting debate there. What happens is that we choose a grape variety or style to compare in a tasting and then each of the school’s tutors champion a country or region that produces that style. It’s all good fun and I suppose that we shouldn’t read too much into the results, but recently we had a tasting debate on Syrah and the results were extraordinary, so I thought I would tell you about the wines.

I had decided to champion the Americas, while colleagues had each opted for other places; Jimmy Smith chose South Africa, Cherie Agnew is from New Zealand and decided to showcase the increasingly exciting Syrahs from her homeland, while Shane Jones, our resident classicist, took on the job of presenting Syrahs from France.

Whilst thinking about what actual wines to show, I decided to concentrate on just one area. We had already debated Syrah once before and I had shown one from Chile that was very well received, the delicious Errazuriz Aconcagua Costa Syrah  (while the winning wine that previous time was also one of mine, the magnificent Syrah du Liban from Domaine des Tourelles in Lebanon),  so this time I chose to focus on the United States as I have tried quite a few really exciting American Syrahs of late. After a little contemplation both of my wines came from California.

The rules were pretty simple, we each had to present two wines, one per round, with the first one selling for under £20 and the second between £20 and £40.

I will just go off on a brief tangent about the name of the grape – Syrah. The grape originates in France and is called Syrah, as far as I can tell, no one knows why. We do know though that it does not come from Persia and has no link with the Persian city called Shiraz at all. Until the 1970s the Australians called the grape Hermitage – after the Syrah wine of the same name in France’s Rhône Valley. There appears to be no earthly reason why the Australians took to calling it Shiraz, none I can find anyway, so it is possible they just didn’t know how to pronounce Syrah, a strinization of Syrah if you will. Or it was a memory of a famous late nineteenth and early twentieth century Australian fortified wines band – fake Port if you like – called Shirazo. Such has been the success of Australian Shiraz though that many people like to call it Shiraz, wherever it grows. I stick to the original, unless the label specifically states Shiraz.

Wine Map of California – click for a larger view.

California is of course much more famous for Cabernet Sauvignon, Merlot and Chardonnay than anything else. Pinot Noir has become big in recent years, since the film Sideways and more importantly since Californian growers worked out which sites suit that fickle grape. Syrah though has been creeping up on the outside for quite a while. Although a little has been grown in the state for as long as the California wine trade has existed, it was the Rhône Ranger movement of the 1980s that really put California Syrah on the map and plantings developed at a great rate during the 1990s. Sadly the economic downturn from 2008 onwards, together with increased popularity of cheaper Australian Shiraz, caused sales of California Syrah to pretty well crash.

Its popularity seems to have peaked, but that means that a lot of the bulk production and vineyards in less suitable areas have now disappeared, leaving California Syrah largely in the hands of the real specialists. Growers who love the grape and grow it in the perfect locations to produce a distinctive style and wines of great quality. It was this that I wanted to illustrate with my two wines.

My first wine was one that I have admired for quite a long time: 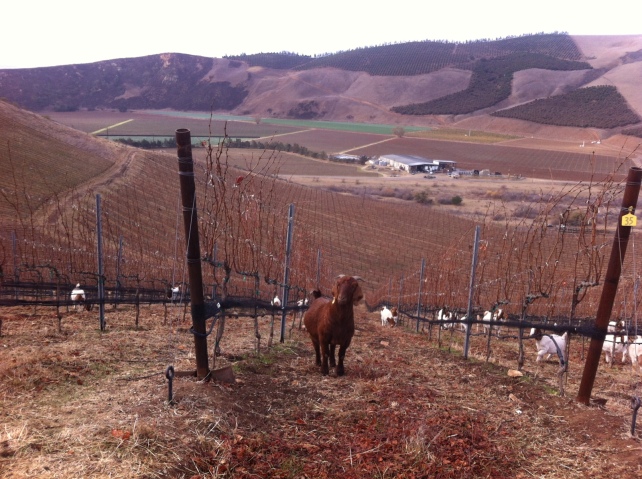 Qupé Vineyards and Winery – photo courtesy of the winery.

Bob Lindquist created and runs the wonderful Qupé Vineyards and is a real Syrah specialist, perhaps the leading one in the state. Qupé – pronounced kyoo-pay – is the Chumash word for the California poppy. The Chumash people are native to California’s Central and Southern Coast areas.

Bob produces three different Syrahs, with this, his Central Coast Syrah, being his entry level wine, being a blend from different sites with the Central Coast region or AVA / American Viticultural Area. Don’t let that fool you though, it is very good indeed. Actually it is only 98% Syrah with some tiny dollops of Grenache, Mourvèdre and Tempranillo and it is a blend of vineyard sites too. 63% comes from cool areas in Santa Barbara County and Edna Valley, while the rest grows in the warmer, Mediterranean climate, Paso Robles area.

Remember, apart from  Paso Robles these are cool areas, suitable for Pinot Noir, so the wine is subtle and savoury, despite its 18 months in French oak – neutral so the flavour does not dominate, just adds smoky spice.

The nose is lovely, generous and ripe, with bright, vivid black fruit together with a lighter, fresher note of cherry, as well as dry spice and black pepper. The palate is very smooth, mellow and round with velvety tannins and plenty of blackberry fruit as well as that lighter, fresher, cherry character. There is a touch of vanilla and smoky oak too, so the wine might repay a little bit of ageing or serving with a rich meal – 91/100 points.

Available in the UK at around £17-£20 per bottle from The Oxford Wine Company, Eton Vinters and others – click here for other stockists.
For US stockists, click here.

My second wine was from one of my favourite estates and winemakers from anywhere:

Joseph Swan started making wines in the Russian River Valley in 1967. The estate is historic and before Swan was only owned by two generations of a single family from the early days of pioneer settlement right up to 1967. The house itself was surrounded by old Zinfandel vines and the estate continues to use these to make one of the very best examples of the grape. In the early 1970 under guidance from André Tchelistcheff  Swan decided to become a Pinot Noir specialist. Some local vineyards had historically grown some Pinot, but he was the first to really specialise in it and he was so successful that today there is a Joseph Swan clone of Pinot Noir. A couple of sites are a bit warmer though and lend themselves to Syrah instead. Swan produce two single vineyard Syrahs, Trenton Estate Vineyard and the Great Oak Vineyard. Joseph Swan retired in 1987 and passed the winery and estate over to his son in law Rod Berglund, who had worked with him for many years. I have met Rod and he is a charming, modest and fascinating winemaker, who puts all his success down to his vineyards – you can see a couple of short interviews I did with him here. Joseph Swan vineyards is a true artisan winery with a hands -off approach similar to classic winemaking in Burgundy and the Northern Rhône.

I cannot tell you how the wine was made I am afraid as the winery did not respond to any of my emails, but that doesn’t really matter. Suffice to say that it is was a real treat.

The nose is rich and savoury, with some pepper and smoke and earth and leather from the ageing – it is 2008. There is plenty of fruit though, blackberry, cherry and raspberry too, together with some mushroom notes. the palate was elegant and refined, not a blockbuster, but no wimp either. It was refined, silky and savoury, but still with a solid core of fruit. There are spices, herbs, leather, earth, mushroom, cherry, blackberry and yes, that brighter, lighter raspberry note too. The finish is wonderfully round and complete. A fine, fine wine that would go with all manner of meat and cheese dishes – 94/100 points.

Available in the UK at around £30-£37 per bottle from The Secret Cellar and The Tasting Room, further stockist information available from Fields, Morris & Verdin.
For US stockists, click here.

Both of these wines are superb, as proven by the fact that they won their rounds of the tasting debate. Both of them really impressed the tasters and made the whole room feel very positive about California Syrah. So why don’t you try them? I think you will really enjoy the wines, they are subtle, fine and beautifully made. So the nest time you deserve a treat, give them a go and let us all know what you think.