The lovely Château Haut-Gléon in Corbières.

Recently I was invited to attend the Vinisud wine fair in Montpellier and had a great time sniffing out all sorts of wines from the south of France. The fair actually covers the whole of southern Europe, but I limited myself to France, otherwise I would still be there, sniffing away.

Foncalieu
I was the guest of the Foncalieu cooperative, which is an impressive outfit based in the Languedoc, but whose operations have spread to the Côtes de Gascogne and Côtes du Rhône.

Being an unreformed lefty – albeit of the Champagne variety – I have a soft spot for cooperatives and find many of them to be top notch wine producers and Foncalieu are one of the best. They have a smart and sophisticated wine range and I have long been an admirer of them because they are so good at what they do, both in producing good wines at good prices and in pushing the envelope. What’s more in keeping with the cooperative ethos, everyone seemed to be very nice and to be proud of what they do. The president of the company is the charming Michel Bataille – a great name for a former soldier I thought – and he was quite clear that the company’s mission was to serve the winegrowers, so to market their production efficiently, to defend their rural environment and to produce good wine. To these ends he said they really do need solidarity in all they do and seeing him shaking hands and chatting with the other growers in the co-op – Michel owns vineyards too – it really seemed that there was a genuine comaradarie here.

While in Montpellier I tasted my way through a good cross section of their wines and I was, as ever, impressed by the quality, the packaging, style and the breadth of vision – they offer an Albariño and a Sauvignon Gris for heavens sake – and yet still many UK consumers think the French don’t innovate!

Foncalieu produce a massive array of wines under many different labels, but the principal quality label is Le Versant. This is a stylishly packaged range of nicely made Vins de Pays / P.G.I.s in classic varietals that are classy enough to grace any table – we drank them with stunning food in a 3 star Michelin restaurant in Montpellier and a fine time was had by all. 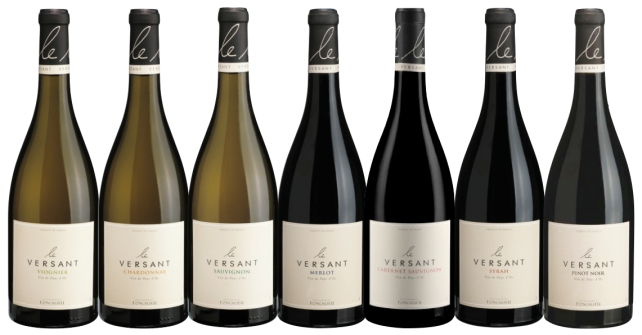 I was similarly impressed by their deliciously drinkable Domaine Cambos wines from Côtes de Gascogne. This is only a vin de pays / I.G.P. region but it is a wonderfully reliable source of modern French white wines, try some the next time you are wondering what to drink. Their 2013 Domaine Cambos Colombard-Sauvignon blend would keep any Sauvignon drinker happy, mind you so would the more richly textured and fruity 2013 Domaine Cambos Gros Manseng.

I also enjoyed their attractive 2011 Château Saint Angel from the obscure Cabardès appellation, which is in the Montagne Noir near Carcasonne and is one of the very few places in France that traditionally blends Aquitaine (Merlot and Cabernet) and Mediterranean (Syrah) grape varieties.

Map of the Languedoc-Roussillon region, click for a larger view.

Château Haut-Gléon
A real highlight for me was discovering Château Haut-Gléon, which although owned by Foncalieu is run entirely separately. This is an estate in Corbières which is apparently pretty well known on the continent, but has very little exposure in the UK and so was completely new to me. I cannot imagine why it isn’t more widely sold over here as the wines are very fine indeed.

I met the director – or directrice as her card says – Karine Meyer at a group dinner one night and got to taste some of her wines and to hear something about the Château. I was pretty excited by them so went to their stand the next day to taste my way through the entire range and my first impressions were confirmed.

Situated some 20 km north of Perpignan, near the sea, in the enticingly named Vallée du Paradis, in Durban-Corbières – one of the 11 terroirs of the Corbières appellation – Haut-Gléon has a long history going back to Roman times. The estate has certainly been making wine since the seventeenth century, but its high reputation for quality only dates since the 1990s when the Duhamel family bought the property and restored it after decades of decline. Foncalieu bought the estate in 2012 and plan to develop it as a wine tourism destination, while maintaining the high quality of the wines produced there. 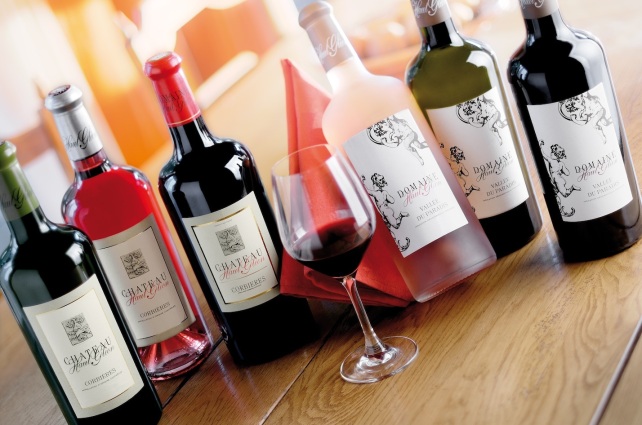 These are very good wines, full of character and style. The estate enjoys a cool micro-climate which enables them to make elegant examples of red Corbières and to craft excellent whites and rosés too. They round it all off by presenting the wines in a unique and stylish heavy bottle, which gives the wines good recognition.

They make 2 ranges, Domaine de Haut-Gléon, which are  labelled as Vin de Pays de la Vallé du Paradis, not Corbières, but are very good indeed. The main label though is Château Haut-Gléon itself and these A.C. Corbières wines are a little more serious and fine.

As you might expect though, it is the red wines that are the most famous, I tasted the 2009 and 2008 and both were very fine blends of old vine Syrah, Grenache and Carignan indeed with a lovely supple palate, a juicy mix of red and black fruit and judicious use of balancing oak enhancing the delicate spicy quality.

The Château Haut-Gléon rosé is excellent too, this Syrah and Grenache blend is brimming over with fresh cherry and strawberry fruit, with a touch of creamy ripeness on the palate. For me though the big surprise was the superb Château Haut-Gléon white, which was quite delicious. It is an exciting blend of Roussanne, Grenache Blanc and Marsanne aged for 6 months in new oak barrels.

These are really good wines, far superior than most people would expect from the Corbières region whose general reputation is one of offering good value for money rather than finesse. Do try them if you can, you won’t regret it.

Cathagène
Rather excitingly I was also able to try my first ever examples of Cathagène, which is a speciality mistelle or liqueur wine specific to the Corbières region and is a bit like Pineau de Charente, Ratafia de Champagne, Macvin or Floc de Armagnac. Basically it is grape juice from the estate fortified with brandy made from the grapes grown on the estate. Cathagène can be white or red and I greatly enjoyed the examples made by Château Haut-Gléon. The white is a blend of Marsanne and Muscat, while the red is pure Syrah. Both would be splendid after dinner drinks or served with lightish desserts. The white would be perfect with homemade biscuits (a bit of sophisticated dunking beckons perhaps?) while I think the red would be lovely with a black forest roulade.

I was going to write about some more of the exciting things I found in Montpellier, but will leave those for another day, so make sure you come back soon.