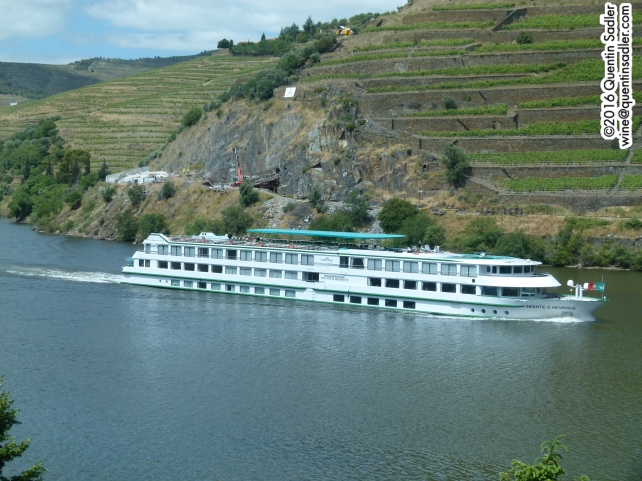 Vineyards on the banks of the Douro in Port country.

I am in a real Port mood at the moment. I cannot imagine why as it is spectacularly unseasonal, but I just seem to have tasted a few Ports recently that have fired up my imagination for this wonderful wine style.

I like Port, I have always liked Port and enjoy it very much, but I don’t actually drink very much of it as it can be pretty heady stuff – especially the rich Ruby types – including LBV – and Vintage.

However, there are lighter styles – Tawnies – and it is some these that I have tasted and enjoyed of late. I say enjoyed, I mean loved!

It is always fascinating to taste a range of Ports and recently I was fortunate enough to taste my way through several that really pleased and impressed me. I will write more about some of those soon, but today I have chosen one of my favourites as my Wine of the Week.

Ruby ports ageing in wooden vats at Quinta do Noval.

We have all heard of Sandman I am sure. Who can have failed to see the iconic caped figure – The Don – on a label or in advertisement at some point, but many of us might not be aware quite what a venerable company it is. It was founded in 1790 by George Sandeman – a direct descendant, also called George Sandeman, is still involved with the company – a young Scot who quickly made his mark. It helped the development of his business that he served on the Duke of Wellington’s staff during The Peninsular War. The Duke, although a great soldier and fine commander, was a notorious snob who looked down on anyone who was not of the nobility, so tended to fill his staff with the scions of wealthy and titled families. Throughout the long campaign these young men were able to enjoy George’s Ports and I am sure that the preference for Sandeman’s Port stayed with them throughout their lives. Certainly business was good for a long time to come, with Sandman being a byword for quality until well into the twentieth century. There was a bit of a dip in its fortunes for 20 years from 1982 when it was taken over by Seagrams, but in 2001 Sandemans became part of the impressive Sogrape group and its future now seems bright.

Although Sandman produce all the important styles of Port, including some superb vintages and single quinta vintages, they appear to be something of a Tawny specialist. A true Tawny Port is one that has been aged for a long time in wood – the best examples are sold with an indication of age on the label, 10 year old etc. All that time in wood makes the wine paler and more orange – or tawny – and less sweet and more nutty and caramel-like than a Ruby Port or an LBV. They can be served lightly chilled too, which makes them more versatile wines.

It is really the maturing that defines a Tawny’s style. It is a blend of different vintages and vineyards aged for different lengths of time in different wooden vessels, none of them new – they don’t want the oak to dominate. This particular Tawny is a blend of wines varying from between 15 and 40 years old.

Tawnies and Colheitas (single vintage Tawnies) ageing in cask at Quinta do Noval.

The nose offers a lively mix of rose hips, orange, apricot and caramel, while the palate is creamy with a buttery caramel quality and a rich nutty feel. There is plenty of fruit too, but it has evolved into a gentle plum, raisins and dried red fruit together with a dash of spice. It doesn’t really feel that sweet, although it is, as the nutty and slight salty feel dominate the palate giving it an umami feel and the illusion of savoury richness. The alcohol is nicely balanced and is part of the whole, while the finish is long and satisfying, helped I think by a nice seam of freshness. A glass or 2 of this before going to bed would make all feel right with the world. Mind you, lightly chilled it would make a lovely late afternoon tipple too, or after lunch, or elevenses, you get the picture. A glorious example of fine Tawny port – 92/100 points.

Available in the UK at around £30-35 per bottle from Waitrose, Waitrose Cellar, Slurp, Hedonism Wines, Corking Wines and Lea & Sandeman.
For US stockists, click here.

One thought on “Wine of the Week – a fine Tawny Port”