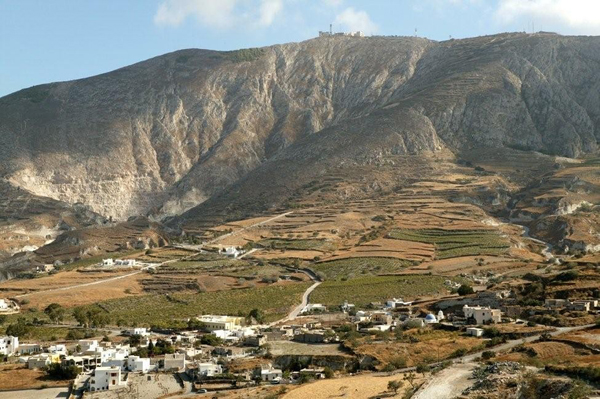 With summer sporadically here, I was very excited to see that one of my favourite dry white wines had returned to Marks and Spencer, it’s great value too.

Regular readers will know that I love wines that are just slightly unusual and a little off the beaten track. There are so many great wines out there made from places and grape varieties that most people just do not think of trying and I see it as my mission to tell the world about them.

For many, many years I have loved exciting Greek wines. Greece is not high on many wine drinkers lists of places to explore, but it really should be, the country makes a dazzling array of styles of indigenous and international grapes and I would urge you to try a few Greek wines.

Some of Greece’s very best wines come from the beautiful island of Santorini. Santorini in my opinion is truly a great wine region and it makes some of the best white wines in the entire Mediterranean area, the reds aren’t too shabby either by the way. 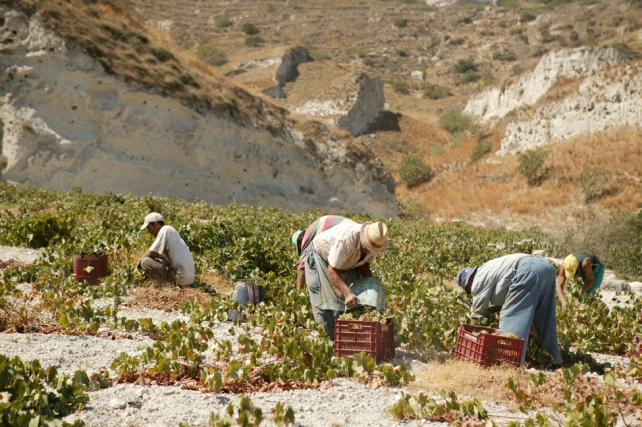 Harvest at Argyros, back breaking work, but worth the effort.

2013 Atlantis White
Argyros Estate
Santorini
P.G.I. Cyclades (like a Vin de Pays, but actually could be labelled as a P.D.O. Santorini)

This estate has been family owned since 1903, but most of the success has been since 1974 when the founder’s grandson, Yiannis Argyros, took over. Yiannis managed to dramatically expand the vineyard holding to 65 acres, which is massive for Santorini. The vineyards are all in Episkopi Gonia Thiras, not far from the airport, and the vines are trained into a basket to protect them from the extreme winds. What’s more they the vines hug the ground to keep them out of the wind and to maximise the effects of the morning dew in this hot, dry climate.

The secret weapon for white wine on Santorini is the wonderful Assyrtiko grape. It is high in acid, so makes clean refreshing wines even in the heat and like Sauvignon Blanc and Riesling, as well as Sicily’s Carricante, usually has something mineral about it.

Atlantis white is 90% Assyrtiko grapes  with 5% each of the richer Aidani & Athiri.

White Santorini wines vary quite a bit in style from rich and heady to taut, mineral and crisp. The blend here makes this wine somewhere between crisp and soft as it is slightly fleshy and textured, so it feels less mineral than some pure Assyrtiko wines. However it is still utterly delicious, bone dry and very drinkable – indeed my bottle emptied in minutes. The palate gives a touch of pear that softens the citrus, while the nose has a touch of the sea. This makes a stunning aperitif as well as being perfect with a bit of fish, a salad and some grilled prawns or squid – 89/100 points.

I have tried three vintages of this wine now and always been impressed, the estate actually produces ten different wines, including dessert wines and I hope to taste some of the others before too long.

If you have never tried a Greek wine, or a Santorini, or just want a lovely dry white wine, do give it a go, I promise you won’t regret it.

Available in the UK from Marks & Spencer at £10.49 per bottle.
Distributed in the US by Athenee Importers.