I only went because the idea sounded completely bonkers.

The invitation had arrived a few days earlier, for a Japanese food and Sandeman Port matching dinner. Only half paying attention I almost missed how bizarre the concept was and had to read it again just to make sure that I understood.

I had – it really was a Japanese food and Port paring dinner! If you wonder why I thought that was an extraordinary idea, it is because normally I match the weights of food and wine as much as the flavours. So lighter flavoured food tends to work best with lighter weight wines. I would normally expect big flavoured and full-bodied wines to swamp delicate flavours and I think of Japanese cuisine as having very delicate flavours indeed. So I was really surprised that someone was going to pair it with Port. The idea was so daft that I just had to give it a go!

If I had any doubts about going at all, the fact that the tasting was to be at the trendy Aqua Kyoto just off Regent Street in London was a clincher – as was that our host would be the delightful George Sandeman. 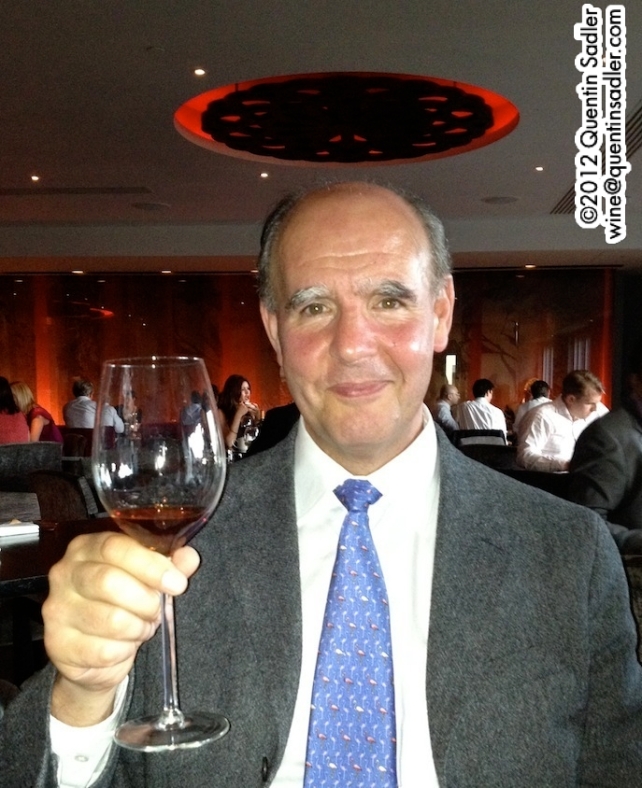 Arriving at the fifth floor restaurant via a lift from Argyle Street, I was immdeiately plunged into the sort of self aware darkness that clubs favour. I like light, but once my reactolite glasses had settled down I was fine with it. Going through to the bar the whole place had a party atmosphere with crowds, noise and music.

As our party trickled in we chatted and were handed an array of Port based cocktails – something I had never come across before, but they were pretty good and there are some recipes on the Sandeman website. Whether you want a short and alcoholic cocktail or a long and refreshing one, it appears that Port can be a good base.

During the preamble we introduced ourselves and chatted about Port and discussed what the evening was all about. Basically we were there to discover how versatile Port can be. It isn’t just to be drunk at Christmas, or only with cheese and needn’t be enjoyed solely after dinner with some walnuts either, but can be used as an accompaniment to food.

The menu was certainly ambitious, with a wide array of dishes arranged in four courses. First up was a starter that consisted of Edamame Beans, Prawn and Scallop Haramaki – the word used to refer to a warrior’s armour, but is now used to mean a tummy warming wrap or, as in this instance, a sort of spring roll – and a Duck Salad with Pomegranite, Baby Courgette and Duck Ponzu.

We paired this with the Sandeman 40 Year Old Tawny Port, which was the oldest wine of the night. This might seem counter intuitive, but remember Ports became more delicate as they age, whereas the courses of a meal start light and become progressively more intense, so the Ports got younger as the dishes became richer.

Frankly not everything worked, but I don’t think that was the point. We all discussed what went and what didn’t and there was a lot of agreement between us. The wine was fine with the salty note of the beans and the rich umami flavours of the duck echoed those of the Port pretty well – the salad got in the way rather, it was the meat itself that worked. Which made me realise that Peking Duck or crispy aromatic duck would both be excellent with a Tawny Port as the Hoi Sin sauce – always my favourite part – has a similar salty, umami, caramel sort of flavour profile.

The second course was all seafood with a Confit of Salmon with Apple Miso and Baby Squid Kara-age (which seems identical to Tempura to me) with Crab Miso all paired with Sandeman 30 Year Old Tawny Port. This didn’t really work at all, the wine was much too rich and overpowering, however we managed to beg some Soy Sauce and Tempura Dipping Sauce to expand the experiment by dipping the squid in the new sauces. To my surprise the Soy overpowered the Port, but the Tempura Dipping Sauce was perfect. It’s light umami notes again echoed those of the wine and made these two unlikely partners work perfectly together. It was even better than the dishes original Crab Miso sauce which was far too delicate. Basically the dish was very good Calamares and if anyone has ever tried Port with Calamares before then they are even stranger than I am.

Next was the main course which was a sort of Japanese Surf and Turf consisting of cubes of Twice Cooked Pork Belly and skewered Langoustine Tails. This dish was not a bad match at all for the Sandeman 20 Year Old Tawny Port which had less of a caramel note to it and a more salty flavour that emphasised the wine’s umami character. The Langoustine were sweet and succulent enough to just hold their own while the Belly Pork was pretty good. However the wine matched the sauce or jus more than the meat itself as the flavours of the sauce had not permeated through the meat, but had pooled at the bottom of the dish. The sauce was amazing and was magnificent with the wine, but it was impossible to really tuck into it with the chopsticks – I needed a spoon or some bread! It was a successful enough match though to make me want to try a Tawny Port with meat where the sweet, smoky, salty flavours have infused right through – so next time I will try it with American Barbecued Ribs, Pulled Pork and Brisket.

After this I went back and tried the 20 Year Old Tawny with all the dishes that had come before and it was by far the best general match because it seemed less sweet.

The dessert was a total surprise. It was White Sesame Parfait with a Cherry Tea Sauce and some crisp Sesame Praline and not only was it delicious, but it was pretty good with the Sandeman 10 Year Old Tawny Port, however it went even better with the less sweet 20 Year Old Tawny. When I put the Praline in my mouth and mingled it with a sip of the Port the flavours exploded in my mouth like good toffee popcorn – I can recommend it.

It was a terrific evening with some lovely food, tremendous Ports and it was a delight to chat with George about the history of his family and Port house. It made me realise that I could drink a lot more Port if I just broaden the range of foods that I drink it with, it is much more versatile than I had ever thought.

Using aged Tawny Port was a great idea as any other style would have been more powerful and just dominated the food. Barrel aged Tawny is more delicate, all that time in oak removes the sensation of much of the power and make the sugar and brandy just two more components of the wine as the complexities from barrel ageing develop – nut, fig and caramel – and compete for your attention. These were superb Tawny Ports, richer, finer and more powerful than many – do try them. Vintage Ports are often wonderful, but aged Tawnys are the Cinderellas of the Port world and also deserve to go to the ball. I certainly intend to enjoy them more frequently from now on.

5 thoughts on “Tawny Port with Food?”