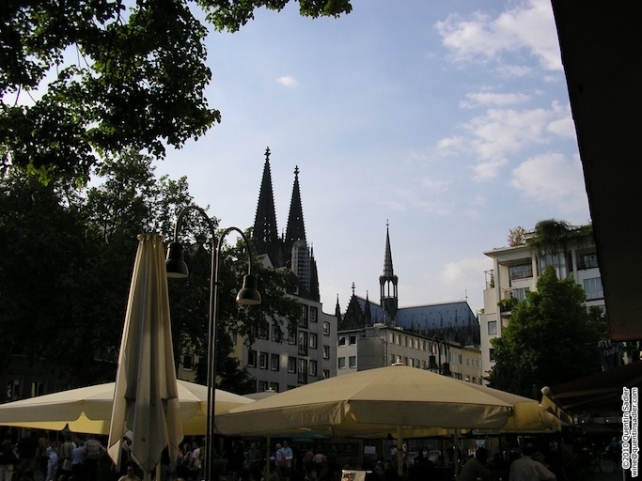 Bustling Köln from the Früh brewpub

Summer is, intermittently, here and so my thoughts are increasingly turning to beer. Nothing is quite as refreshing or cleansing on a hot day as a cool beer, so I tend to think about it a great deal at this time of year.

In truth I am a bit of a beer wuss. Because I like beer to refresh I am normally drawn to lighter, criper brews, especially Pilsner type lagers. However such beers can be quite wonderful and I object to the lazy, but widely held belief that all lagers taste the same. Mass market lagers brewed in the UK do, but that is not the same thing at all. Try a König, a Paulaner and a Warsteiner side by side and compare them with an Urquell or an Alhambra Reserva 1925. In fact pop over to the Netherlands and taste all the different types of Grolsch, including seasonal versions – they are all still lagers though. In fact this does raise the question as to why all the big name lagers do become completely bland once they are brewed in the UK, when they have become famous enough to be brewed over here precisely because of their flavour and character!

One of the reasons that I have never taken to ales is that the richness, sweetness and bitterness are emphasised by the warm serving temperature in Britain. I was astonished by the vibrant beer culture in New York State last year. Contrary to popular belief this side of the Atlantic all the local beers there were pretty rich, flavoursome and strong – even the beers called lagers were more akin to an ale in taste and weight. I really enjoyed the Ithaca Apricot Wheat Beeras well as the Pale Ales and Nut Brown from the same brewery and other ales, pale ales and IPAs from brewers local to the New York Finger Lake region. They were always enjoyable to me and I think it was because they were served chilled. For me this did not reduce the flavour, but balanced the tastes and let the freshness shine rather than the sweetness or the bitter hops – try chilling an ale next time, you might enjoy it.

All of which brings me to one of my favourite beers – Kölsch. I really like this type of beer, but unfortunately it can really only be appreciated where it is made – although I noticed that some people are brewing Kölsch-type beer in America. 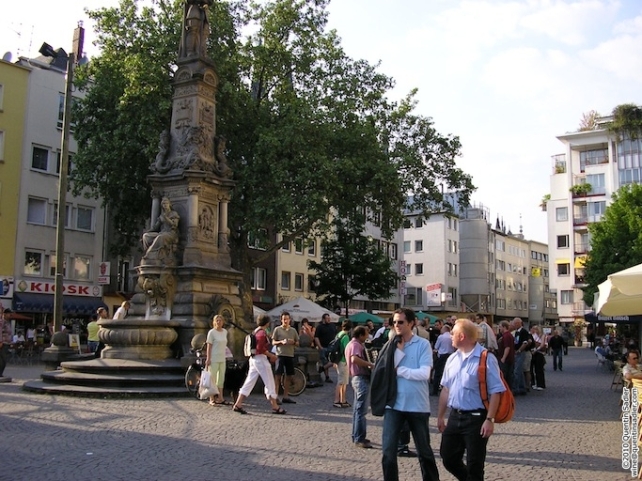 Some of Köln’s many bars

I say Kölsch-type, because Kölsch itself can only come from Cologne/Köln in Germany. It is one of the many regional beer styles in that beer obsessed country, unlike most German beers though it is technically an ale – although there is no word in German to differentiate an ale from any other beer. The only other ale I am aware of in Germany is Altbier from Düsseldorf which uses darker malts, more bitter hops and ferments at a higher temperature than Kölsch, all of which makes the beer more demonstrative and gives it a bitter finish. The biggest difference though is that the term Altbier can be used anywhere by anyone, whereas Kölsch is restricted to a certain place and style.

Like most traditional things in the modern world, Kölsch is actually not that old – it seems the term was first used as late as 1918, but of course beer had been made in and around Köln forever. In fact the city had an array of brewpubs who produced a cloudy, unfiltered beer called Weiß. Unfiltered Kölsch, also called Weiß, is making a modest comeback nowadays.

Kölsch as it exists today has evolved from that Weiß of the early twentieth century, but is really a post World War 11 creation and as such is quite a triumph. Local beer production was in decline after the war and lagers from other regions of Germany were becoming dominant. Basically the city’s brewers got together and codified their traditions of brewing into an agreement called the Kölsch Konvention – this set the production rules, making it almost a voluntary appellation controlée. Top fermenting was retained while some of the aspects of modern lighter beers were brought in as well, paler malts, lagering (cold maturation) and filtering – although filtering is not a given anymore. A hoppy character is supposed to be prominent in a Kölsch, but it is subtle and gentle so and that is true compared to a Pilsner type with its delicate Saaz hops – traditional Kölsch hops are the light almost Saaz-like Hallertau and the richer, more aromatic Tettnang.

The Kölsch Konvention also specified that Kölsch could only be brewed in the city of Köln and the area around it that includes Bonn.

They even said what glass and measure it would be served in – a 20cl tube called a Stange or pole. In 1987 Kölsch achieved protected designation of origin status, so this agreement between the brewers acquired legal EU-wide standing.

I like Kölsch beer, it is a wonderful marriage of an ale with some lager-like characters – it is pale, cool and crisp – with richer, fruity ale-like notes. The top fermenting even introduces a touch of spice to the brew and as some wheat is used there are even hints towards wheat beer/weißbier, but only hints. Kölsch is fresh and not heavy in any way and it points towards subtle aromas and flavours rather than delivering great big wallops of anything to your palate – except refreshment and pleasure.

I can sometimes buy it in the UK in bottle and do so from time to time, but Kölsch really comes into its own though when visiting Köln.

It is a great city and you should visit, there is very little of the old city left since the war, but the place is very attractive and teeming with life and the few pockets of old buildings add charm to the rest.

What brings Kölsch beer alive though is visiting one of the city’s brew pubs. There are 14 brewers of Kölsch and I think I am right in stating that all but one have a brew pub. All these pubs of course only serve one beer, but sometimes three different versions of it – their normal Kölsch, a Weiß and occasionally a non-pasteurised version of the main brew – they are served straight from the barrel. 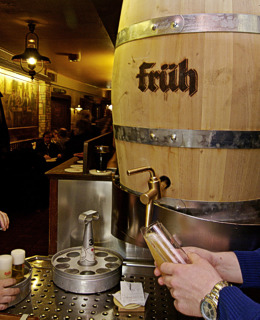 The most famous brewpub is Früh, near the Cathedral and it is as good a place to start as any. Like the others it becomes so busy that the locals describe the standing area of the pub as  the schwemme – swimming pool – as you have to surf or swim through the crowd. The uniformed waiters, who each carry a kranz – metal trays that have sockets to hold the glasses, kranz translates as wreath – are known as Kobes – short for Jakob – for some reason lost in the mists of time, unless they really are all called Jakob? 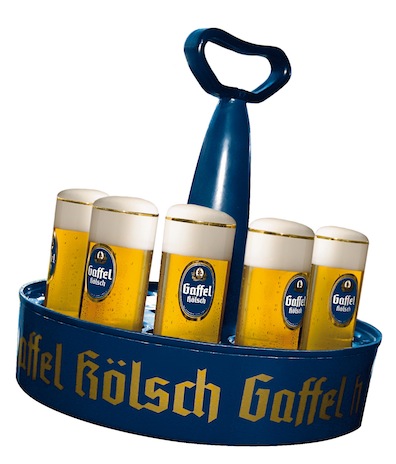 In typical German fashion there is wood-paneled room after room and I am sure the different uses, like an English pub’s lounge bar or snug, are apparent to a native, but they are too subtle for me – a bit like the differences between brasserie, bistrot and restaurant.

In one of these many rooms you can enjoy a glass of Kölsch and some of the traditional foods that accompany it – although actually it goes with pretty much anything. Some of the classic snacks are:

Halven Hahn – ‘half a hen’, which is aged Gouda cheese with a rye bread roll. (top in the photo above)

Kölsche Kaviar – ‘Cologne caviar’, which is blood sausage with raw onion rings and a rye bread roll. (bottom right in the photo above)

A quarter metre of Brätwurst, potato salad and a Sion Kölsch

I have not tried all the different Kölsch beers, but Früh is the softest and most easy drinking that I have tasted, Küppers seemed a fraction sweeter, but they have a weiß on offer as well, as did Heller when I was there. Sion seemed to me the most pilsner-like being crisp and light in flavour, Malzmühle the most hoppy with Päffgen the driest and possibly my favourite – especially with a quarter metre of brätwurst.

Barcelona may have the fame for tapas bars, but Köln is a wonderful city and the beer culture is an amazing experience that I would highly recommend while Kölsch is a perfect summer brew even if you cannot get over to Germany.

Früh and Küppers are both available in the UK from Beer Here while Only Fine Beer stock Früh, Küppers, Reissdorf and Dom. James Clay is the UK agent for both Früh and Küppers.