One of my favourite places to visit is Brussels. It really is delightful, very civilised, quite beautiful and small enough to enjoy on foot. Who could resist the beauty of Grand Place with its ancient guilded buildings, or the warren of little streets all around it that are lined with seductive restaurants, many complete with stunning displays of shellfish? What’s more there are loads of cafés offering ever more exciting ranges of beer and artisan chocolate shops galore – oh yes, there is much for the hedonist to enjoy in Belgium’s capital.

I was in Belgium the other day on business and had a couple of hours to spare in Brussels, so planned a little pilgrimage. Long ago in my Interail days I was in Brussels and found my way to a restaurant that opened my mind to the delights of mussels, until that moment I had been unsure about them. However one memorable day in 1986 I made up for lost time by trying and enjoying mussel soup, a bucket of Moules au vin blanc and a third course of Moules à l’escargot – mussels cooked with garlic in the style of snails. That meal had stuck in my mind and I thought that I would recreate it.

Chez Léon - the view from my table

Regular readers will be aware of my strange aversion to swanky restaurants – especially when on my own. I usually seek out the casual and traditional type of eatery when on my travels and Chez Léon is one of the best in its class. I am sure that it is very touristy, I expect there are better mussels elsewhere, although the frites would take some beating, but for sheer fun I have been to few better places. The ambience is lovely, the place is perfect to look at – almost a caricature of a Belgian restaurant, as if Hergé had drawn it. It is a higgledy-piggledy series of interconnected rooms, with brass rails, hat stands, chalked up food offers and an array of tiny tables with chequered clothes and a black and white tiled floor that all adds up to a feeling of faded fin de siècle grandeur. As well it might, the place has been here since 1893 and is something of a Brussels institution. In recent years they have expanded into France as a sort of fast food chain called Léon de Bruxelles, but those branches have never tempted me, whereas I doubt I could walk past this original without being drawn in.

Chez Léon is in the Rue des Bouchers, just behind Grand Place and opposite that other great Brussels eatery Aux Armes de Bruxelles – all the other eateries around with their desperate strong arm selling tactics serve merely as a colourful backdrop to these two famous restaurants.

What Chez Léon does really well is mussels. They have a huge menu loaded with Belgian specialities, but I have never deviated from moules and have always enjoyed them. Many try, but nowhere does mussels quite like Belgium, the Netherlands and northern France in my opinion and I have given up ordering them elsewhere. Sadly I am now older and a tad wiser than in 1986, so once comfortably at my table enjoying a rather excellent beer and perusing the extensive mussel menu – see below – greed failed me and I was unable to relive the experience, settling instead for a simple bucket or cocotte of moules and frites. 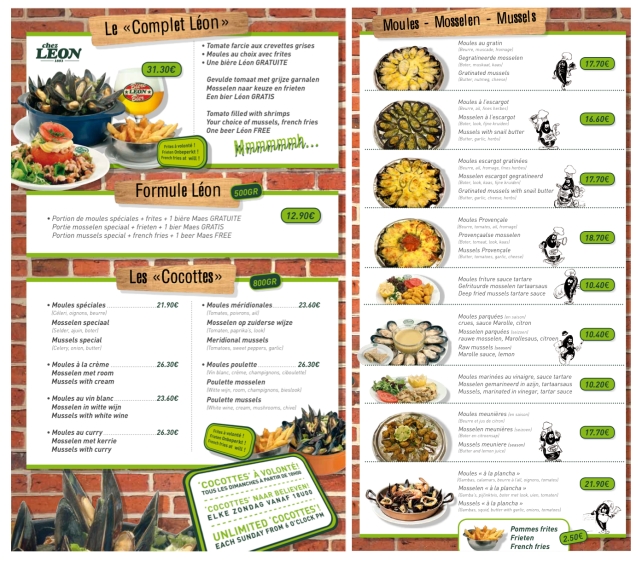 However temptation very quickly came my way again when halfway through my cocotte the waiter asked me if I wanted more – it seems that on Sunday evening the moules are bottomless… decide for yourself whether I had any more, I couldn’t possibly comment.

After Brussels I was off to a new place for me; Ghent – Gent in the local Flemish and Gand in French. I had some idea of what to expect from internet research, but even then I was not expecting it to be as beautiful as it was. I do find it strange that Belgium is so overlooked by us Brits as somewhere to visit.

Belgium is often mentioned as something of a joke; we all know the game; ‘How Many Famous Belgians are there?’ (Answers below please – fictional answers count double!) Even popular Brugges came in for a ribbing in that wonderful film ‘In Brugges’ and all these years on comedians still express amazement that Stephen Fry went to Belgium when he ran away from that play. I am of the opinion that there are few nicer places to run to. If I needed to relax and unwind a little I can think of few better places than one where you get a free bit of cake with your coffee. 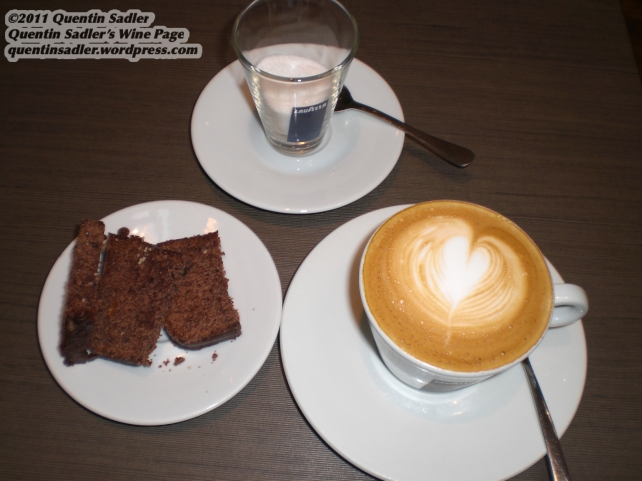 Coffee is never served on its own

If you have never been there I would highly recommend a visit to Ghent, it is not far either, just 30 minutes on from Brugges. Unlike its more famous neighbour Ghent is a real living town and not a tourist museum – it is still pretty though with a network of canals meandering through the centre and glorious buildings everywhere you look.

The centre of Ghent

There is even a medieval castle slap bang in the middle of town – the Gravensteen built by Philip of Alsace in 1190 is an extraordinary sight and totally dominates the centre of Ghent.

I was very taken with the place and have put it on my list of places to return to, perhaps when I finally go on that Belgian beer trip I have been thinking about doing for twenty odd years.

3 thoughts on “Brussels – a hedonists delight”