vines growing on the slopes at Txakoli Talai Berri

I have long been fascinated by the Basque Country, how many other places can not only boast about using the oldest European language, but one that is related to no other? Basque is the last remaining pre-Indo-European language in Western Europe.

The Basque people have a vibrant history, a beautiful land, a prosperous present and a rich culture. It is widely considered to be the finest bit of Spain for gastronomy, both for swanky meals and tapas, called pintxos locally. It also produces some of the most thrilling wines in Spain today – which is really saying something as I consider Spain to be one of the most exciting wine producing countries in the world.

True, it doesn’t make much wine, but what it lacks in quantity it more than makes up for with quality. By a strange quirk of history a little piece of Rioja is not actually a part of La Rioja province at all, but part of the Álava province, which is in turn one of the three provinces that make up the modern Basque region – the Comunidad Autónoma del País Vasco (in Spanish) or Euskal Autonomia Erkidegoa (in Basque).

This is Rioja Alavesa, or Alavan Rioja which occupies a small area on the south facing slopes of the Sierra Cantabria. The land is high with good exposure to the sun, which ensures ripeness and balance in the wine and it is really noticeable how elegant wines from Rioja Alavesa can be in comparison to cheap examples, especially from Rioja Baja. Interestingly Rioja is often seen as a land of brands, with grapes blended from all over the region on the negociant model, rather than a producer of estate wines. In Rioja Alavesa the tradition is to have small family run estates, this means that, Marqués de Riscal apart, the area is home to fewer famous brands than the larger sub-regions of Rioja to the south. 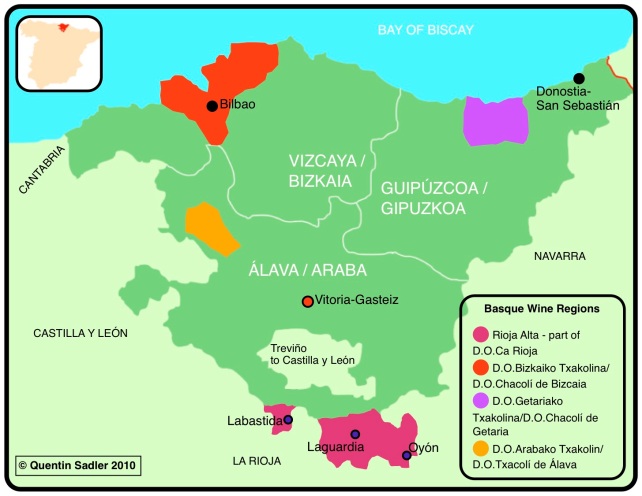 Map of the Basque wine regions - click for a larger view

Rioja Alavesa concentrates on fine red wines, but also produces some superb whites. However, the Basque region is also home to three outstanding little wine regions whose production is overwhelmingly white. These are the three Chacoli regions that specialise in producing light-bodied, yet incredibly tasty, crisp and spritzy dry white wines that partner shellfish to perfection, a little red and rosado is made, but white is the main thing:

Even added together Chacoli production is tiny, one reason why the wines are never cheap as they love them at home and there are many Americans of Basque origin creating a huge demand for these wines in the United States.

Taken together there are only 92 producers, 587 hectares of vines and 2,700.000 litres of Chacoli produced – equal to just 3,600.000 bottles for the entire world. Bear in mind this stuff is light, fresh and very drinkable – I could easily down two or three bottles if I was in the mood.
In the UK these wines are well over £10 a bottle and in Spain they are usually around €10 and up, which is why much of the cheap stuff served in the pinxos bars of San Sebastián is actually Vino de Mesa made in a Chacoli style. A little Chacoli is also traditionally produced in neighbouring Cantabria and Valle de Mena in Burgos, which is as far north east as Castilla y León goes, right by the border with Vizcaya.

Not content with having a unique language the Basques appear to be the only people who grow the Hondarrabi Zuri and Hondarrabi Beltza grape varieties – if anyone knows of anyone growing these varieties elsewhere, please let me know.

So, all this week I am touring the Basque wine regions, mainly Rioja Alavesa, but my journey kicks off in San Sebastián and Chacolí de Getaria. I will try and post something of interest everyday, so keep coming back.