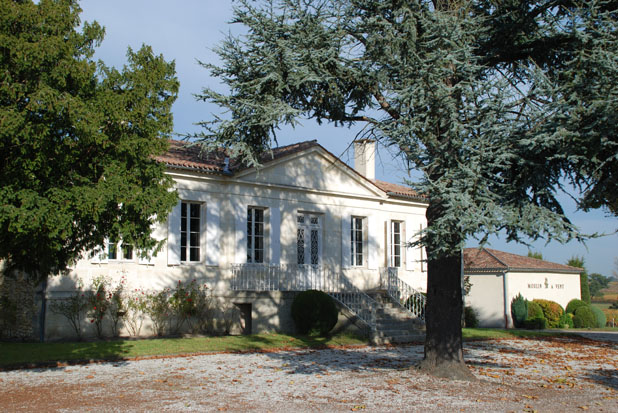 I tried another Claret yesterday and it was an interesting contrast to the Château Tour St Bonnet 2006.

It was a bottle of the 1999 Château Moulin à Vent, which is a Cru Bourgeois from Moulis-en-Médoc, which together with neighbouring Listrac is one of the two inland commune appellation contrôlée of the Médoc – map here. Château Moulin a Vent is right on the border between the two communes, at the south western end, just a kilometre or so from the town of Listrac and only two kilometres west of Château Clarke.

The estate enjoys a pretty high reputation and has a certain fame because of its confusing Beaujolais-esque name. They aim to produce as supple a wine as they can and to that end have more Merlot than Cabernet Sauvignon – their vineyard contains 60% Merlot, 38% Cabernet Sauvignon and 2% Cabernet Franc with the finished wine usually being close to these proportions.

The colour was garnet going on a little tawny – so showing some age.

The nose was fragrant, leather, coffee, cedarwood and truffles with subtle red fruit and prune notes.

The palate was medium-bodied with a lovely freshness from balancing acidity that keep the wine vital and alive and mean it would be lovely with a great deal of different food.

The flavours are savoury and slightly gamey with some succulence from prune-like fruit. The tannins are firm, but quite light and smooth – not a major component of the wine, just a little bit of structure, together with the freshness, on the long, clean finish.

This had aged really nicely and was an elegant and classy dry red wine that would be superb with duck, roasts or a steak – 89/100 points.

This was a finer wine than the Château Tour St Bonnet, more complete, more enjoyable, more complex, more concentrated and better balanced. This really could win over new admirers who have not experienced good claret before.

Available from Majestic @ £9.99 a bottle – although you may have to hunt around now, or ask them to locate some for you.