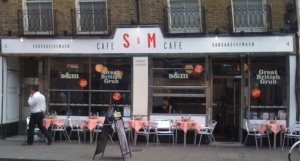 I have long sought two types of casual dining in London, a proper American diner, if there are any please let me know, and a proper British caff serving proper British grub of good quality.

I love a greasy spoon café, but all the ones I know fulfill a very limited function and keep short hours too. Nourishment rather than pleasure and leisure is the order of the day. Well today I stumbled across somewhere that took the caff to a different level. In doing so it filled that gap between very basic food and better restaurants; a gap that does not appear to exist in other countries, for example see my articles – here and here.

I found the rather daringly named S & M Cafe in Islington Green, its proximity to an ‘Adult Centre’ almost made me overlook it. In many ways the it does resemble a traditional caff and some locals were using it for their bacon butties and mugs of tea, like any other working men’s café, but this place is so much more.

However good the sandwiches looked, and they were tempting, I needed something more substantial. Being of partly Irish origins, I simply cannot refuse potato cakes – ever. So the starter of a large potato cake underneath a slice of black pudding, topped with a perfect poached egg and all surrounded by elegant drizzles of hollandaise called out to me – I had to try it and I enjoyed it very much. However, I was very nearly good and ordered the chicken liver and lardons salad – perhaps next time?

The menu is pretty extensive and includes fish pie, shepheds pie, fishcakes, fish and chips, salads, all day cooked breakfasts, and many different sandwiches, but the star attraction is surely the Bangers and Mash, sausages and mash to non-Brits.

There are eight choices of sausages to choose from together with four varieties of mash and three of gravy. I settled for the ‘Euro’ selection which consisted of a Toulouse sausage and a Dijon sausage with traditional mash and onion gravy. I’m not sure about the Euro name actually – why not French? Nomenclature apart, it was one of those lovely simple and tasty meals that did the job perfectly, the gravy was luscious with loads of onion and hints of rosemary while the mash was creamy and the sausages delicious.

The pudding choices were similarly traditional, sherry trifle, lemon possett and two different crumbles served with custard; given the name of the café ‘lashings of’ custard should surely be on the menu somewhere! 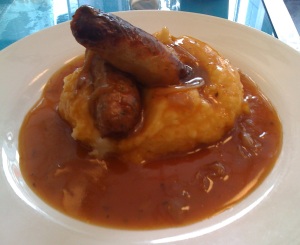 I hardly ever drink alone and really could not face any wine, but they do have a small but serviceable list of wines that includes a Sauvignon Blanc and a Merlot from Mont Gras in Chile and, more excitingly a Pinot Noir from Yering Station in Victoria, Australia. Perhaps the wine range could be improved upon, but hey most cafés don’t have any!

I really enjoyed the look and feel of the place, it was very busy, and they had worked hard at making it look exactly like a good greasy spoon and the food was very enjoyable too.

Isn’t it good that a place like this exists, helping to make eating out more casual, but still nice. It is also good that they champion traditional British food of good quality and present it in an affordable and enjoyable way.

By the way, if you have not already realised, the seemingly naughty name stands for Sausage and Mash.