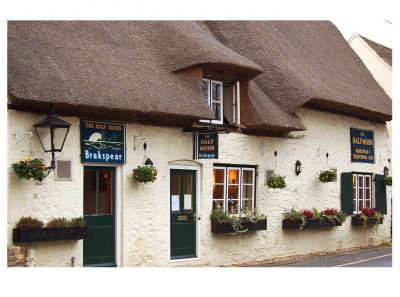 Last weekend I was tutoring a whole stream of wine tastings, which was more tiring than you might imagine, so I felt in need of something nice for lunch. The events were part of the Henley Food Festival, so there was a restaurant arena, where Oxfordshire restaurants and gastropubs were showing their wares and offering taster portions of their food.

It was not the warmest day, so when I noticed a particularly lovely looking pie on a bed of what appeared to be cassoulet, it appealed. I eventually discovered that it was available from The Half Moon at Cuxham, near Watlington in Oxfordshire.They were offering other goodies from their stall in the arena, as well as the pie; a rather fine looking mutton burger and a strawberry panna cotta and shortbread dessert, however it was still the pie that drew me. I was excited and curious and slightly nervous when I saw what the pie actually contained. They described it as a Game ‘Scotch pie’ and listed the meat; squirrel, rabbit, pigeon, muntjac and venison!

Now I like Elvis Presley’s music, but have never taken my appreciation of the king as far as eating the sorts of odd things that he enjoyed, famously fried squirrel and peanut butter sandwiches, but also I have never been in a position to try squirrel before and who knows if I ever would again.

So, I bought a pie and am glad I did, it was stunningly delicious. The pastry was perfect, crisp, crumbly and flakey. The filling was solid and lean meat with a delicate game flavour, lovely gentle seasoning and a really good consistency and it was served on a bed of the most incredibly tasty home made baked beans. I highly recommend this pie, it was superb and they told me that it, or something similar is often on the menu at their restaurant.

The Half Moon is run by a lovely couple called Andrew and Eilidh and they seem to really enjoy their food at the same time as taking it seriously. Andrew gave me some slices of proscuitto that he had made himself from a Gloucestershire Old Spots pig, it was very good with a lovely clean flavour of real depth. Andrew also told me that squirrel is often available on their menu too, so perhaps I will try it again after all.

Unfortunately I forgot to ask him if he has any peanut butter.

One thought on “Great Food at Henley Food Festival”