We were driven over rolling hills to the village of Dobrovo. Down a tiny lane at the end of which was a beautiful stone manor house bearing the name Movia and the date 1820. 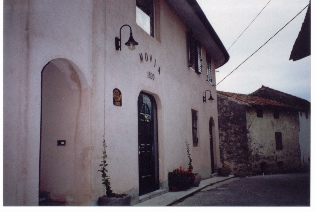 They have 15 hectares in Brda, seven in Italy and can blend these as they like, and sell the wine as produce of either country.

Because of heavy winter rainfall, and this year in summer too, the vineyards need to be terraced to avoid erosion. The soils are a variable mix of gravel, sand, and calcium-rich marl.

They grow an esoteric range of grapes:

Winning over the politicians

From the cellars we climbed to a lovely terrace, the sun was now shining and the view of the vineyards superb. Ales told me that Tito had ordered all wineries to be collectivised and only the cooperatives could market wine. Kristancic refused and Tito came to see the place for himself. Being a bon viveur Tito tasted the wines, was convinced and Movia remained privately owned and in-dependent. The current Slovene President is a regular visitor and close friend; a couple of years ago he brought Bill Clinton there too.

Movia Brut (Chardonnay-Pinot Noir) 1998 followed and this was splendid too, beautifully balanced fruit and oak (only 30 months this time, but some barrel fermentation). The mousse was creamier here, very fine and very persistent. Perhaps on balance the pink was the finer, but both were very good.

Ales then invited us into his baronial dining room. The table was set as if for a banquet with a sparkling array of Riedel-style glasses and vast platters of prsut (prosciutto), salami and cheese produced on the estate. Not having had lunch I admit I tucked into these, which were delicious, as was the home- baked bread.

In the meantime, the cork man was determined to be a living Italian caricature, so he took it upon himself to do the pouring, dancing and singing his way around the table and thoroughly entertaining my sons. He considered it bad form to move on to the next wine before the last one was finished, so it took one and a half hours to taste three wines!

Back to serious tasting

Randall Grahm please note this wine’s long established name translates as “big white”. It is a blend of Chardonnay and Pinot Grigio, with a deep rich golden colour, flavours of figs, pithy grapefruit and a peachy/fleshy texture. This all contrasted perfectly with the cinnamon toast, vanilla and custard characters from three years in barrel. The Pinot Grigio gave a delicious light lift to the Chardonnay and produced a beautifully balanced wine.

This was 100% barrel fermented and spent 18 months in cask. Intrigued, I asked him when he had decided to plant Chardonnay, before independence, or had he seen the trend earlier. He laughed, it was well established here by 1820! This was an incredible, complex, rich and toasty wine. Very like old fashioned white Burgundy made by a man who has never tasted a new world Chardonnay. It was dry with lean fruit and an oily, spicy oak character rather than sweet and soft. It was superbly integrated, full and utterly delicious.

Finishing on a stunner

We had time for one more wine and Ales chose a stunner:

Veliko Rdece translates as “Big Red” which is what it was! This is their flagship wine and is a blend of Cabernet Sauvignon, Merlot and Pinot Noir. My, the nose was superb, spicy with sweet redcurrants and spice. The taste sensation was great, rich, full yet lean and fresh too. The tannins were firm enough to keep it perfectly balanced, but were soft and ripe too. Joyous red fruit mingled with umami /soy sauce characters; it was complex, fine, elegant and long.

And so, after a group dance enforced by the corkman, with a red rose in his lips, we headed back into Italy after this wonderful winery visit.

The Fascination of Slovenia

Before this visit I had no experience of Slovenia, so the wines had been a revelation. I have now made two visits and found the wines to be generally very good. As well as Movia I have enjoyed wines from the Goriska Brda cooperative (their Quercus range is particularly good, especially impressive as this by far the largest producer in the country), fine red blends from Kmetija Blazic, superb Sauvignon Blancs from Andrej and Mirko Kristancic’s (Movia’s cousins) Nando Estate and stunning passito-style Rebula from Ivan Batic.

Dare I confess to even having enjoyed a delightful Sivi Pinot from Ljutomer? Yes, that Ljutomer. All in all I found Slovenia to be an enjoyable and fascinating place.

5 thoughts on “My Visit to the Movia Winery, Brda, Slovenia”